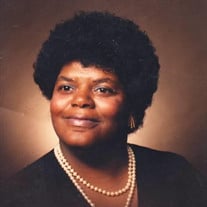 Carolyn passed away March 5, 2022 at home following a courageous battle recovering from a Stroke. Carolyn was comforted and cared for by her Holy Cross Healthcare Team and a devoted son Rondy P. Griffin II. She was a wonderful wife, mother, grandmother, accomplished Educator, Staff Developer, Principal, and friend to many. At Dunbar Elementary she played softball, basketball, volleyball and ran track. She always made the Honor Roll. She believed Dunbar was a vast world of opportunity for growth and development, for leadership, for sports, for academics, for drama, for music, for interpersonal relationships, for friends - blood or not - that was East Baltimore. She participated in the same sports at Dunbar High School and made the Women's Basketball team at University of Maryland College Park in 1962 on scholarship. A graduate of Coppin State College and Masters in Education from Johns Hopkins University, her goal had always been to be educated because she loved learning and sharing. Early on a Recreational Leader at Somerset Projects introduced her to 100 books she should read by the time she finished High School. By the end of 9th grade, she had read 130 extra books and reported on 45. She was given an Award by the School (Dunbar) for her efforts. She taught at School #20 for five (5) years and went on to become an educational associate as a part of the Model Cities Program. In 1973, She joined the Office of Staff Development. She worked hard, climbed the educational ladder and served as Assistant Principal at Dr. Martin Luther King Elementary School and later as Principal at Park Heights Elementary School #14 and Furman L. Templeton #125. Carolyn retired from Templeton having served the children of Baltimore City for 32 years. Carolyn had an avid interest in reading, writing, poetry, traveling and volunteering. Believing that these endeavors expand the mind - She read newspapers and magazines of all types daily. She read books on all subjects - at least two (2) dozen or more a year. Carolyn traveled extensively, having visited every Continent except Antarctica. She found that travel broadened her perspective on life with a firsthand view of many cultures and people. Amazingly, She would say,” I have found ME all over the world.” During her career she was a part of NABSE (National Association of Black School Educators) corporate She became an investor in building experiences for girls growing up founding the Sisters Of Nia. As Queen Mother of The Red Hatters and Pink Hatters she was always working to give back, volunteer and share new experiences. Volunteering - going beyond yourself to give to others in time, talent and energy was learned early at Somerset Recreation Center. Carolyn became a volunteer at ten (10) years old. She had amassed so many hours, she was given an award by Mr. L. Clement Nixon, Supervisor of Recreation. Devoted to her continued spiritual growth she was a dedicated member of Lost and Found Ministries and Servants of the Crucified Savior (SOCS) with Rev. Maurice Blackwell. Early Reflections on the East Baltimore Community she felt a sense of pride and gratefulness for how it helped to nurture her. The gratefulness came from the input of ministers like Rev. Vernon T. Williams at First Baptist on Caroline Street. Bishop Showell at First Apostolic, Fr. Offer at - St. Francis and others who took their Churches off the corners and brought them into the communities to spiritually enrich the lives of the people. They brought programs into the projects, Vacation Bible School, holiday feasts and programs, things that a depressed area and people could have hope. Carolyn was passionate about East Baltimore and the nurturing environment it provided. She penned a book “From Roots To Fruits” which is part of the founding collection at The East Baltimore Historical Library, a partnership with the Henderson Hopkins School and Johns Hopkins University. Carolyn was an avid Music & Art Collector often gathering friends and family to travel to The Philadelphia October Gallery to meet and find unique art from renowned artist Thomas Blackshear, Charles Bibbs, and many international works from the continent of Africa. She was happiest at home celebrating holidays surrounded by those works of art along with the gathering of family and friends listening to the Godfather of Soul-James Brown. Carolyn was a loving wife, strong mother, faithful grandmother, and “tough” sister- You know she was a black belt . She leaves to celebrate her memory her Son Rondy P. Griffin II, her Grandson (Gemariah G. Griffin), her sisters Dorothy Holt (Howard) and Lenora “Nodie” Doles. Nieces Karen Doles, Aprile Purvis, , Christian, Nephews Allen Doles, Mark Taylor, Arlen Doles, Adrian Doles and a host of cousins, and devoted friends. She was preceded in Death by her husband Charles E. Blackwell Jr. ,her parents James and Naomi Doles, Brothers Allen A. Doles Sr. and Gregory Smith.

Carolyn passed away March 5, 2022 at home following a courageous battle recovering from a Stroke. Carolyn was comforted and cared for by her Holy Cross Healthcare Team and a devoted son Rondy P. Griffin II. She was a wonderful wife, mother,... View Obituary & Service Information

The family of Carolyn Doles Blackwell created this Life Tributes page to make it easy to share your memories.

Carolyn passed away March 5, 2022 at home following a courageous...

Send flowers to the Blackwell family.