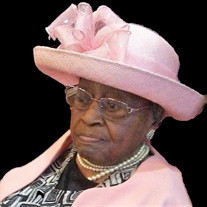 Zelda May Cheatom, daughter of the late Gladys and Harry King was called home to be with the Lord on January 15, 2022. Born July 3, 1927, in Baltimore, Maryland, Zelda was raised in a Christian home and accepted Jesus Christ as her personal Lord and Savior as a young girl. A long-time member of Ebenezer Baptist Church in Baltimore, she actively supported and faithfully served all church activities including the Missionary and the Johnny Jones Ministries until her health began to decline. Although Zelda was born in Baltimore, Maryland, she had resided in Richmond, Virginia for a period of time where she received her formal education. After returning to Baltimore, she met and married her husband, Ora Cheatom who preceded her in death in 1999. Zelda (affectionally called Mother) had an active and nurturing family and social life. She enjoyed cooking, traveling, and hosting gatherings throughout the year, especially on holidays. Zelda was an avid lover of the outdoors spending countless hours enjoying her pastime, fishing. She was also quite a gardener, loving to see the fruits of her labor as she grew various plants, fruits, and vegetables. Zelda was a member of the Rebecca Chapter No. 2 Order of the Eastern Star. She held many positions including that of Worthy Matron. Sewing was a great hobby at which Zelda excelled in her craft after attending sewing school in Baltimore and becoming an excellent seamstress. She loved sewing whether it was for herself or so many others. She created beautiful everyday clothes, wedding dresses, choir robes and so much more. Zelda was a voracious reader of all literary genres. Reading the bible and applying the word to her daily life was a priority to her. Zelda was preceded in death by two daughters: Glenda Pitts and Gladys Powell. She leaves to cherish her memories, four daughters: Mildred Fon, Carolyn Page, Roslyn Hall, and Elaine Smith and, one son Gary Cheatom (Shawnte); eight grandchildren: Michele Stansberry, Darryl Powell, Michael Baylor, Katrina Smith, Brian Hall, Jenell Hall, Ian Page, and Gary Cheatom Jr.; thirteen great-grandchildren, five great-great grandchildren and a host of relatives and friends.

Zelda May Cheatom, daughter of the late Gladys and Harry King was called home to be with the Lord on January 15, 2022. Born July 3, 1927, in Baltimore, Maryland, Zelda was raised in a Christian home and accepted Jesus Christ as her personal... View Obituary & Service Information

The family of Zelda May Cheatom created this Life Tributes page to make it easy to share your memories.

Zelda May Cheatom, daughter of the late Gladys and Harry King...

Send flowers to the Cheatom family.