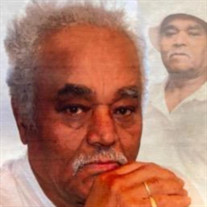 On August 29, 1939, in Wilson, North Carolina the great Maybelle and Isaac Edmundson became the proud parents of Zebide Edmundson the second born of ten children. Zebide also known as Mr. Zeb, Zeb, Donut Man, Pops and Dad by former co-workers, County School District. In 1958, Zeb moved to Baltimore, Maryland starting his first job at Hooper’s Restaurant as a cook and baker. While there, he met the love of his life Doris C. Hinton in 1959. They were joined in Holy Matrimony on January 23, 1960. From the wonderful union four amazing children were born. In his earlier years he became self employed t Folgers Bakery donuts to local Baltimore City convenience stores and being named “The Donut Man”. At a early. Zeb became a entrepreneur starting his own Grocery Store along with his wife at Fulton Avenue & Mount Street. Upon closing, they opened Qwik Pick best known for their Cheesesteak subs and four wings along with Qwik Pick Boutique Clothing Store in Eastpoint Mall formerly known as as Independence Mall where the kids and grandchildren worked. This taught them at an early age how to be independent young adults. Mr. Zeb was known for the love of his cars winning numerous trophies, certificates and awards. He enjoyed teaching his kids and grand kids how to drive. Once receiving their permits, he would take them on 195 south to his hometown to visit his mother Maybelle and family. It was a must to see his childhood history and stop at Bills & Parkers Restaurant to get mince barbeque, corn sticks and hush puppies. Dad loved to cook and barbeque for family gatherings, events and 3W’s while also perform every Wednesday Karaoke Night singing and dancing to his favorite song’s night and day with his loving beautiful wife. Zeb enjoyed living life, helping and assisting residents at the senior citizen residence on Moravia Park Drive in which he resided at. He shined bright like a star always being out-spoken, loud, loved to be seen and the center of attention in any room. When you heard his voice, you knew Zeb was in the room! On Wednesday, October 20, 2021 Zebide lost of his fight to cancer with his lifetime partner beside him. “I have fought a good fight, I have finished my Course, I have kept the faith 2 Timothy 4:7

The family of Zebide Edmundson Sr created this Life Tributes page to make it easy to share your memories.

Send flowers to the Edmundson family.