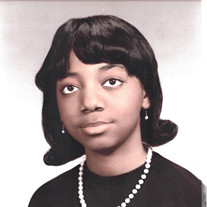 YVONNE DELORES FENTRESS was born on December 10, 1951 in Baltimore, Maryland. She was the daughter of the late Melvin R. and Eddie Mae (Scott) Fentress. She departed this life on Sunday, September 26, 2021, at her home. Yvonne was a 1969 graduate of Western High School. She majored in Elementary Education and received her Baccalaureate degree from Morgan State University in 1973. She taught in the Baltimore City Public School System for a short period. She then worked as a food stamp worker in the Income Maintenance Division, Baltimore City Department of Social Services, until her retirement. Yvonne was a tenacious learner during her years of formal education and she strived for excellence with no desire for recognition of her successes. As a young girl, she enjoyed drawing. She grew up among a small cadre of very close friends: Terrina, Claudia, Alice, Carolyn—who took dance classes and were brownie scouts and girl scouts together. Always adept in her skills and attributes, she touted and praised the accomplishments of others above her own. She was content to take the shadow spot in the corner, away from center stage. Only her family and closest friends knew Yvonne as an ever-curious soul and a hungry observer of life, of people, of many things. She was the person of record, the memory bank of familial occurrences: birthdays, graduation years, weddings. Her view of the world was wide-eyed and cumulative through a remote lens that was vicarious and innocent. In spite of her reclusive nature, she was a tireless and passionate advocate for her father to whom she was devoted and for her younger brother. In her father’s last years, she was his conversation partner, the courier of his meals from her mother’s kitchen when he was ill, his griot to whom told stories shared only with her. For her brother, she was his administrative manager, his unwitting moral compass, and loyal mediator in any venue or circumstance of need. A devout Catholic and deeply religious person, Yvonne was a lifelong member of the Church of St. Ann. She received every sacrament of her life within these walls of her Mother Church. She was also an occasional volunteer at the parish office. Yvonne and her sister Debbie shared their childhood home for much of their adult lives. In Yvonne’s years of declining health, her sister was devoted to her physical care and emotional wellbeing. Through every challenge, Debbie was her rock, her protectress, her loving champion and beloved friend. Gone to their rest before her were her parents, Melvin and Eddie, her sister Elaine, and her brother Melvin. Yvonne leaves to cherish her memory: two sisters, Deborah Fentress and Theresa Fentress Bryant; brother-in-law, Max Bryant; a niece, Gemma Bryant and nephew, Brian Cousin; and a grandnephew, Alexander Brown; two nieces-in-law, Julie Conasonand Kyonna Cousin; two faithful and supportive friends, Elizabeth Lutz and Sr. Jeanne Barasha, SSND; a score of foster sisters and brothers, and a host of cousins, other relatives and friends. She will be sorely missed by all.

YVONNE DELORES FENTRESS was born on December 10, 1951 in Baltimore, Maryland. She was the daughter of the late Melvin R. and Eddie Mae (Scott) Fentress. She departed this life on Sunday, September 26, 2021, at her home. Yvonne was a 1969 graduate... View Obituary & Service Information

The family of Yvonne D. Fentress created this Life Tributes page to make it easy to share your memories.

YVONNE DELORES FENTRESS was born on December 10, 1951 in Baltimore,
Maryland....

Send flowers to the Fentress family.