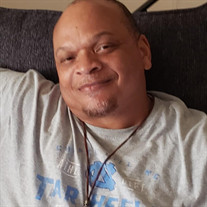 William Edward Jones (Bo) was born March 26,1968 in Lewes, DE to Luvinia (Jones) Drummond and George Toppin. He was preceded in death by his dad Harold Lee Taylor, his grandparents George and Gracie Mae Johnson, and his step-father James (Cowboy) Drummond. William received his early education in the Indian River School District, attending East Millsboro Elementary and Sussex Central Junior High. He completed his high school education at Woodland Job Corps Center. Bo loved the Philadelphia Eagles and North Carolina Tar Heels! He enjoyed playing spades with his friends, reading, and coaching youth football. Most of all he enjoyed quality time with his family. His family wasn’t just blood created. Once you became his friend, you received family status… bro, sis, cuz! His loving manner made him King of the Court and Life of the Party. The pride of his heart was his children. In December 1984, William met the love of his life, Lisa (Lynn) Thomas. He was so sure of this love that he proposed in February and made her his wife in September. This created an unstoppable blended bunch to which they added two more children. He excitedly renewed his vows with his queen after 25 years in September 2020. He leaves to cherish his memories: his loving wife, Lisa Jones, of Henrico, his amazing children, Lamar, Yolanda, Nathan (Sarah), Keisha, Koby, and Myah; his mother, Luvinia Drummond, his sisters Denise Jones and Starr White (Mike); (12) grandchildren, a host of aunts, uncles, nieces, a nephew, cousins, and a loving set of hand-chosen devoted friends aka his tribe.

The family of William Jones created this Life Tributes page to make it easy to share your memories.