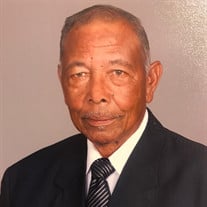 William Horace Hawkes answered the Master’s Call on Friday, September 17, 2021. He was born to the late Welton and Rosa Brown Hawkes on February 24, 1947, in the Earls community of Amelia County, VA. “Horace”, as he was affectionately known, attended the Manassa Hill Elementary, Russell Grove Elementary School and Russell Grove High School. He loved high school where he played baseball, basketball, and was involved in extracurricular organizations including New Farmers of America, Math and Science Club, including being inducted into the National Honor Society. At an early age, Horace confessed his life to Christ and walked with Christ until he was called home. He was baptized and became a member of the Manassa Hill Baptist Church where he was a devoted member and served in multiple ministries of the church. In July 2011, he and his wife moved their membership to the Mosby Memorial Baptist Church in Richmond, VA. Since joining Mosby, he has faithfully served as a trustee, an usher, and member of the Finance Committee, Men’s Ministry and Food Service Ministry. On October 4, 1969, Horace married the former Bessie Crayton. To this union, they were blessed with a daughter, Yolanda. They enjoyed fifty-one years of marriage. During their time together, they worked together and served together – in the church and in the community. Additionally, they enjoyed traveling to such places as Hawaii, Alaska, Jamaica, Haiti, Canada, Mexico, and The Bahamas. As a dutiful servant of the community, there was no project too big or too small. Horace was a dedicated member and leader in the Virginia Free & Accepted Masons, Inc, with both Silver Trowel Lodge #267 and Henrico Lodge #041 for over 40 years. He also served in the Eastern Henrico Ruritan Club where he held numerous officer positions. At the state level, he was elected as Zone Governor II and was named “Ruritan of the Year” of 2010. One of his most notable achievements with the Ruritans, was being named a national Tom Downing Fellow in 2012 for unselfish personal effort. Horace’s love for Amelia County, or “the country”, was demonstrated in his passion for the outdoors where he loved to hunt, farm and fish. As an avid hunter, he loved to go up the country to get out with his dogs during rabbit and deer season. He and his father started the Hideaway Hunt Club which grew to over 20 regular members. When hunting season was over, he would go “down to the river” to see what he could catch, tend to his garden, or spend time doing yardwork. You could take the man out of the country but couldn’t take the country out of the man. In his younger years, you might catch him on the baseball field where he played with the Scott’s Fork Tigers and Richmond Braves. It was safe to say, he was always busy, whether at work or play. Never one who shied away from an honest day’s work, Horace started his work career immediately after high school at Dollie Madison Industries in Blackstone, VA and then on to Sonoco Products until he moved to Richmond. He began working at Western Electric which would eventually become a part of AT&T and then Lucent Technologies where he retired. In 1998, he stepped into entrepreneurship with a trash collection business which serviced customers from portions of eastern Henrico and Charles City counties. Everything he did, he gave 110%. Horace was preceded in death by his parents and an older brother, Welton “BoBo” Hawkes. Surviving to cherish the memories of Horace are his devoted wife, Bessie Crayton Hawkes; his beloved daughter, Yolanda Hawkes; his sisters, Rosetta Archie (John) and Katherine Banks; nephew, Robert Archie (Michelle); nieces Johnnell McLamb (Patrick), and Melanie Banks; and a host of other nieces, nephews, cousins (who were like brothers and sisters), other relatives, and

The family of William Horace Hawkes created this Life Tributes page to make it easy to share your memories.

Send flowers to the Hawkes family.