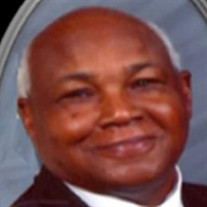 In Loving Memory of William Jake Goode, Jr. (Bubba) William Jake Goode, Jr. affectionately known as Bubba was born in Richmond, Virginia on September 17, 1940, to the late William Jake Goode, Sr. and Annie Belle Goode Morris. On Tuesday, May 10, 2022, he peacefully entered eternal rest and went home to be with the Lord. William was educated in the Richmond Public School system and is a graduate of Maggie L. Walker High School, Class of 1959. William accepted Christ as his Lord and Savior and attended Fourth Baptist Church. After marrying his high school sweetheart, he moved his membership to Pilgrim Baptist Church. William was employed by Pohlig Box Factory for many years. Due to failing health (disability) Bubba retired from Sonoco Products Company after 38 years of dedicated service. When he was not working, he loved taking long drives through the countryside, and watching western movies on television. He was also very skillful with his hands and enjoyed taking on handyman projects as he spent many hours tinkering in his shed. He took great pride in his lawn; each evening Bubba could be found sitting on the front porch smoking a pipe while watering the grass. Bubba was extremely devoted to his wife and four children; his greatest concern was always their welfare and well-being. He was never really concerned about himself, only his wife and children. Wanting the very best for his family he worked hard to provide for them. Bubba afforded his children with opportunities to be successful in life. He also became the neighborhood dad for several of his son’s friends. His five grandchildren were the apple of his eye bringing him great joy. He enjoyed spending time with them. Bubba was a member of the Road Runners. He enjoyed attending meetings, social events and socializing with fellow members. Bubba was a proud man. He lived his life with respect and dignity. He would often tell his children that the most important thing in life was a good reputation and a good name. Bubba never wanted to bring shame or disgrace to his family. Bubba was preceded in death by his twin sister Geraldine Easley and stepfather Rudolph Morris. He leaves to cherish his memory: devoted wife of 61 years, Juanita D. Goode, daughter, Rev. Towanda Goode Johnson (John); three sons, William L. (Jacqueline), Rev. Johnathan S. (Faith) and Bernardo Sr. (LaTonya); two grandsons, Bernardo Goode, Jr., and John Johnson III. Three granddaughters: Brittni Logan, Tatiana and Tayla Goode. sister, Barbara Morton; half-sister, Tyrus Goode; brother-in-law, Robert Charles Sr. Two devoted lifelong friends, Jonah Lawson and Bernetta Washington. A host of nieces, nephews, family, friends and neighbors.

The family of William Jake Goode, Jr. created this Life Tributes page to make it easy to share your memories.

Send flowers to the Goode, family.