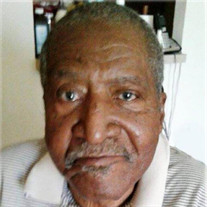 William Gladden, son of the late James and Maggie Gladden, was born on April 13, 1938 in Chester, South Carolina. After a lengthy illness, he departed this life on April 12, 2021. God whispered in his ear, “Come on home, William.” William received his education in Baltimore City Public Schools. He worked various jobs but one that allowed him to do what he loved was working as a cook in City Hospital. After leaving his job at City Hospital he worked a variety of jobs before he found his niche at Royal Cab Company. He worked for Royal Cab company until he was no longer able to work. William was known to friends and family as “Pine”, he loved to cook and would refer to his kitchen as “The Gladden Kitchen”. He also enjoyed spending his time at the racetrack, playing the lottery and visiting his sister and brother. He was preceded in death by mother, Maggie Gladden, brothers, Norman, John and James Gladden, sister Patricia Gladden. William leaves to mourn: one son, William Gladden Jr; two daughters, Debra Mason, Novella Ables (Gerard); six grandchildren, five great-grandchildren; his brother, Samuel Gladden, (Sharon); sister, Bernice Lyde; one sister-in-law, Sharon Gladden; one son-in-law, Gerard Ables; one niece, Samantha Gladden, one great-nephew; lifelong partner, Ineather (Neicy) Dukes; and a host of other relatives and friends.

The family of William Gladden created this Life Tributes page to make it easy to share your memories.

William Gladden, son of the late James and Maggie Gladden, was...