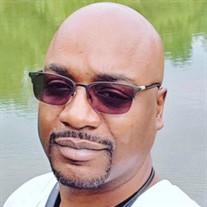 WILLIAM R. COOK JR., affectionately known as Dinkymann, was born to William R. Cook Sr. and Sylvia Cook on July 4, 1979, in Baltimore, Maryland. He slipped away into the arms of the Lord on August 2, 2021. William received his education in the Baltimore City Public School System. He attended Forest Park High School and later received his GED. William went on to further his education by attending Catonsville Community College with an interest in Business and computer science. He went on to obtain his CDL License and enjoyed driving trucks, William loved a challenge. In 2006 William entered his professional career at the United States Postal Service holding a variety of professional positions...where he had the pleasure to meet his Loving Postal Mom Renee. William was raised in a spiritual home and was taught at a young age how to call on the Lord. William had the distinct honor of being a father to four children. He loved spending time nurturing, teaching, and taking lots of photos with kids. He enjoyed traveling and listening to old school music...he also was a very good conversationalist no matter what the topic of choice would be. In 2010, William met Keshia Miller his soul mate, and from this union they had Ashton and Bria and stepdaughter, Kamari. They enjoyed spending time together as a family. William will forever be known as a loving father, friend and son, who loved and cherished his family and friends. He leaves to mourn: his father, William Cook Sr.; loving mother, Sylvia Cook; four daughters, Jillian, Ashton, Bria, Kamaria; one son, Dillon; one sister, Bonica Nicole Cook; four nephews, Cameren, Jonathan, Jaylen, and Trevor; one great-aunt, Lottie Mae Moore; six aunts, Barbara, Elaine,Pamela, Deidre, Margaret, and Donna; four uncles, Garry, Charles, Jerome and Paul. William also leaves to mourn Shirley Pinkney (extended aunt); Valerie Knight (Godmother); and two extended brothers, Christopher and Eric Pinkney. William leaves a host of cousins and friends that are far too many to name, but all had a special place in his heart.

WILLIAM R. COOK JR., affectionately known as Dinkymann, was born to William R. Cook Sr. and Sylvia Cook on July 4, 1979, in Baltimore, Maryland. He slipped away into the arms of the Lord on August 2, 2021. William received... View Obituary & Service Information

The family of William R. Cook Jr. created this Life Tributes page to make it easy to share your memories.

Send flowers to the Cook family.