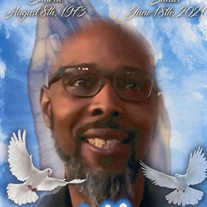 William Allen Brown, Jr. was born in Baltimore, Maryland, on August 8, 1973, to William Brown, and Sandra Epps. He departed this earthly life on Friday, June 18, 2021, after a brief illness. William received his education in Baltimore City Public School system, and he went on to receive his High School diploma, striving for a better future. William met Mildreana Robbins, and from that relationship, Ja'Shawn Royal Brown was born. William loves Ja'Shawn, which solidified his determination to be the best man and father he could be. Will owned his past, he embraced the present, and looked forward to the future. He loves his son with all his heart, and Ja'Shawn loves his Daddy deeply; his response to everyone, when he couldn't have his way, is, "I'm going to tell my daddy!" William, affectionately known as Bill, Billy, and Will, to his family and friends, was a ray of sunshine wherever he went. It was guaranteed that he would put a smile on your face, while in his presence. Forever the silliest person you would meet. William was baptized at an early age and became a member of Bethel Holy Tabernacle (now Kingdom Worship Center). William loved the Lord and deepened his relationship with God over the last few years. William loved his family and friends, and he would do anything he could for them; he would give you the shirt off of his back, if you needed it. One of Will's greatest passions was for basketball. He is preceded in death by grandparents; Henry Epps, Sr., Gladys Epps, and Julius Brown, Sr., and uncles; Henry Epps, Jr., Thomas Brown, Leon Brown, and Kevin Brown. William will be lovingly remembered by: his father, William Brown Sr.; mothers, Sandra Harrison and Vanessa Brown; bonus father, John Harrison; son, Ja'Shawn Royal Brown; grandmother, Annie Brown; sisters, Lakia Crockett (Dana), Shaneka Harrison, Sharia Bessick; a devoted brother/friend, Morris (Pud) Dyer (Sheril); the love of his life, Angela Crowder; Mildrean Robbins, Jay's mother; Uncles, Ronnie Epps, Julius Brown, Jr.; aunts, Jacqueline Barnes, Brendalyn Lewis, Rosemarie Lewis, Cassandra Oliver, Sylvia Brown; his special cousin/son, Rodney (Mannie) Colbert; and a host of bonus children and grandchildren, nephews, nieces, cousins, and friends whom he loved dearly. William will be greatly missed and though our hearts are saddened, we thank God for allowing him to be with us for a season. Son, father, brother, uncle, cousin, confident, and friend, you will forever remain in our hearts.

William Allen Brown, Jr. was born in Baltimore, Maryland, on August 8, 1973, to William Brown, and Sandra Epps. He departed this earthly life on Friday, June 18, 2021, after a brief illness. William received his education in Baltimore City... View Obituary & Service Information

The family of William A Brown Jr. created this Life Tributes page to make it easy to share your memories.

William Allen Brown, Jr. was born in Baltimore, Maryland, on...