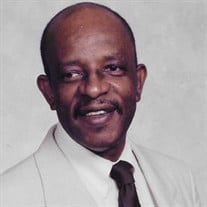 WILLIAM JAMES AMES, son of the late Geraline and Matthew Ames was born on February 9, 1936 in Baltimore, Maryland. After a lengthy illness, William took his flight from this life on Monday, September 20, 2021. William was affectionately called “Wim” by his wife Vanessa. He was known by his family and many others as Brother. Vanessa and William entered into Holy Matrimony 28 years ago, and were blessed to love and rear their grandson James (Jay) Ames. William grew up in Baltimore, Maryland with his three sisters, Agnes, Irene, and Serena. Sadly, his sisters Irene and Serena preceded him in death. Growing up in Baltimore was an exciting time for William; he often spoke about the wonderful Sunday dinners he enjoyed with his Sisters at 912 N. Bentalou Street. During those Sunday gatherings they would often sing, dance, and William could be found playing the piano, by ear. William graduated from Frederick Douglass Senior High School where he also took up an automotive trade at Carver Vocational Tech Senior High School. After his schooling, William enlisted in the United States Air Force. He told many stories about his military days. Upon his return from the Military, William began his employment journey. William was employed with Crownsville State Hospital, Sealtest Dairy as a Milkman, and later became employed at Sparrows Point. After thirty-one years with Sparrows Point, William retired in 1985. William’s Christian journey began at Douglass Memorial Christian Community Church, and before he became too ill to travel he would attend Triumph Christian Church & Ministries with his wife Vanessa. William truly was a homebody. His greatest moments were watching sports on television, movies with his wife, sitting on the front porch, waving at the neighbors, and taking his wife out for evening rides. William will be deeply missed by many. He leaves to cherish his memory: his loving wife, Vanessa Dale Ames; sister, Agnes Sears; daughters, Angelia Ames, Cordretta Ames-Pittman (Michael); two grandsons, James Matthew Ames and John Pool III; three granddaughters, Chikeeyta Greene (David), La’Shon Brown (John) and Amanda Pool; four sister-in-laws, Charlotte Moore, Rev. Sandra Moore- Stanley (Charles), Darcel Cox (Kevin), Franceska Davis (Maurice); and a host of other loving nephews, nieces, relatives and friends.

WILLIAM JAMES AMES, son of the late Geraline and Matthew Ames was born on February 9, 1936 in Baltimore, Maryland. After a lengthy illness, William took his flight from this life on Monday, September 20, 2021. William was affectionately called... View Obituary & Service Information

The family of William James Ames created this Life Tributes page to make it easy to share your memories.

Send flowers to the Ames family.