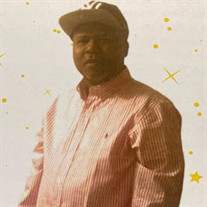 Warren S. Henry was born on January 19, 1964, in Baltimore, MD. Warren was the 2nd to last precious child born to the late Mary Francis Henry and Willie Blake Curbeam Sr. He suddenly departed this life on February 22, 2022. Being born into a spiritual family, Warren gave his life to Christ at the age of nine and was baptized at Zion Baptist Church by Rev. Moses Williams. Warren was educated in the Baltimore City Public school system receiving his High School Diploma from Lake Clifton Senior High School. Throughout his school journey, he gained a host of lifelong friends. Soon after graduation, Warren met Dorothy Williams, and during the 14 years they were together, they gave birth to three beautiful children Tierra, Warren, and Shanika. Eventually, they separated and became great co-parents and friends. Warren met the loving and beautiful Shelia Simpson, and they later married. Warren loved and cared for her daughter Dimeka as his own, and instantly took on the role with no hesitation as the caring and loyal person he was. During their marriage, Sheila was called home to be with the Lord. Warren, affectionately known as Clem or Sugar Bear by his family and friends, was a strong, caring, loyal, resilient, funny, family-oriented man. Clem was an active father and grandfather, and his grandkids were his world. He attended football games, birthday parties and helped with fundraising. He was always down for a party and would make sure you had him down to bring the ham, even if it wasn't on the menu. Clem was a diehard football fan, and his all-time favorite team was the Pittsburg Steelers. He loved to talk trash with his family, who consisted of mostly Ravens fans. You could always catch him at a fight party, too; he was a big Tank fan. He loved to host get-togethers on Wolfe St., where he would cook for his family and friends. Clem loved a casino, so if he wasn't on Wolfe St., you could catch him at the Horseshoe or taking that ride up 95 to Delaware. He was a born entrepreneur, and he knew how to get his money; he always gave trips to Atlantic City and sold raffle tickets. Clem worked various jobs from Burlington Coat Factory to Brook & Brooks Towson District courthouse. With the big heart he had, he embarked on the journey and became a licensed foster parent with the Children's Guild in 2019. Sugar Bear was a big part of our hearts, and he will truly be missed even though you couldn't understand what he was saying. Preceding Warren in death was his loving wife Sheila, his parents, Mary Francis Henry & Willie Blake Curbeam Sr., and three sisters Margaret Ferguson, Lillian, and Montana Curbeam. To cherish his memories, Clem leaves his three Children his first-born daughter Tierra Henry, son Warren Henry Jr. and baby girl Shanika Williams, stepdaughter whom he loved Dimeka Green. His devoted and loving Friend Francina Clay, four beautiful grandchildren, Brielle, Tyler, & Taylor Henry, and Damian Williams Jr. Four sisters Patricia Williams, Terri Winston (Shelton), Eloise Jackson (Fletcher), Willie Denise Curbeam. Five Brothers James Henry (Kim), Anthony Henry Sr. (Myra), Andre Henry (Jamila), Willie Blake Curbeam Jr. (Rhonda), and Melvin Curbeam (Judy), Aunt Estelle, nieces and nephews, best friends Rick, Terrance (Tee), & Buster, and a host of family and friends.

Warren S. Henry was born on January 19, 1964, in Baltimore, MD. Warren was the 2nd to last precious child born to the late Mary Francis Henry and Willie Blake Curbeam Sr. He suddenly departed this life on February 22, 2022. Being born into... View Obituary & Service Information

The family of Warren Henry Sr. created this Life Tributes page to make it easy to share your memories.

Send flowers to the Henry family.