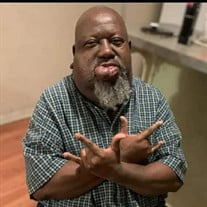 WALTER W. LEOPOLD JR., affectionately known as “Chew” or “Big Walt”, was born on July 30, 1964 to the late Walter and Dorothy Leopold. He was their only son. Walter was unexpectedly called home on April 14, 2021. Walter received his education in the Baltimore City Public School System and graduated from Carroll Park Senior High in 1984. Chew enjoyed listening to all types of music and watching old movies and TV shows. He also loved football; his favorite team was the Dallas Cowboys. He loved spending time with his family and friends more than anything. Chew was a caring, selfless and giving man. He would help anyone in need if he could. Walter was preceded in death by his father Walter Leopold Sr., his mother Dorothy Leopold, and his oldest sister Claudette Leopold. He leaves to keep his memory alive: three sisters, Brenda, Lisa, and Shelly; five nephews, Buster, Mike, Wee, Jamal and Renardo; one nephew-in-law, Tylei; three nieces, Dana, Kiesha and Brittany, three nieces-in-law, Starr, Amber and Siara; two aunts, Roberta and Johnny Ruth; two uncles, Clarence and Gerald; along with host of great-nieces, -nephews, cousins, and friends.

The family of Walter Leopold Jr. created this Life Tributes page to make it easy to share your memories.

Send flowers to the Leopold family.