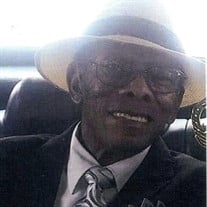 Walter James Edmonds was born in Baltimore, Maryland on Saturday, July 28th, 1934 to the late Jubal Purcell Edmonds and Ann Freeman. He was called into the loving arms of his Savior, Jesus Christ, early in the morning on Friday, August 27, 2021. He was the youngest of 4 siblings. He and his siblings accepted Jesus Christ at an early age. They loved to sing in church. Walter was educated in the Baltimore City Public School System where he was an "A" student. He loved to learn and read books. When Walter was young, his father and uncle taught him the art of boxing. He loved it, and became great at it. In the early 1950's, Walter met and married the late Sarah Ann Johnson. Together they raised 12 children. Not very long after he was married, Walter was drafted into the United State Army where his love of boxing and his skills landed him on the United States Army boxing team. He presented the Army in competitions against other branches of the military, and traveled to other countries representing the United States. Telling his son the stories of his boxing days, he said he was undefeated. Walter had a very charismatic personality. People were drawn to him, and he belonged to several social clubs, including The Amigos and Arch Social Club where he served on the boards as Vice President, Secretary, and Chaplain. Walt, as he was called by his friends, or Pop, as he was affectionately known by his family lived his life loving to sing dance, and have a great time. Most of all, he loved family time. Being with all his family was one of his highlights. He was phenomenal singer. He could sing everything from bass to top tenor. He sang in many groups including the Highway Crusaders and the Sons of Harmony, to name a couple. He shared that passion with his children, grandchildren, nieces, and nephews. Every time he and his family got together there was a song to sing. Through the years, Pop was employed at Baltimore Box Company, Baltimore Hydraulics Inc., Baltimore Gas and Electric, and he was the crew manager of maintenance for the Social Security Administration (Woodlawn) until he retired. Pop was a connoisseur of men's fashion. From his clothes to his jewelry, every time you saw him he was GQ from head to toe! Yes, from the hat to the shoes, no matter what the occasion, winter, spring, summer or fall, he knew how to dress for them all!! And he always smelled good! Pop joined First Mount Olive Freewill Baptist Church under the leadership of Bishop Oscar E. Brown. He rededicated his life to Christ, and in 2001 he married the late Jeannie Watkins. Together they raised 3 children. Pop begin to study the word of God more. His prayer life increased, and God begin to use him to pray for people and encourage his family and friends. He said he knew God put a call on his life, so he wanted to live the rest of his days serving, praising and giving God glory. At his church, he was involved with the New Members Fellowship. He sang on the Male Chorus and was a member of the Brotherhood. He loved his church family and when he could, he would also attend Tabernacle Church of Deliverance Inc. under the leadership of his son Bishop Wayne I. Edmonds Sr. He was preceded in death by his two sisters Gertrude and Annie; one brother William; six children Carolyn, Bernadine, Purnell, Sarah, Bertram and Cynthia; five grandchildren Teresa, Maria, Delroy, Anthony, Nikki; and one great-grandson Ty'ree. Left to cherish his memories are his children John, Walter (Bridgette), Juanita, Wayne (Wanda), Lenora, Keith, Anthony (Nicole), Lisa, Senelda; grandchildren Michael, Charles, Steven, Wayne, Tammy, Gary, Vondelia, Bertina, Tyra, Erica, Karen, Antwan, Dominque, Danielle, Monique, Monica, Troy, Keith, Nicole, Quentin, Tierra, Marques, Marcus, Crystal, Cinisha, Marvin, Precious Sammatha, Franjeni, Alger; 58 great-grandchildren, 32 great-great-grandchildren, and a host of nephews, nieces, cousins, relatives and friends. Walter, Walt, Daddy, Dad, Pop, Pop-Pop, Uncle Walt, Brother Walter, we will greatly miss you and we thank God for giving us a gift in you! To God Be The Glory!!

Walter James Edmonds was born in Baltimore, Maryland on Saturday, July 28th, 1934 to the late Jubal Purcell Edmonds and Ann Freeman. He was called into the loving arms of his Savior, Jesus Christ, early in the morning on Friday, August 27,... View Obituary & Service Information

The family of Walter James Edmonds Sr. created this Life Tributes page to make it easy to share your memories.

Walter James Edmonds was born in Baltimore, Maryland on Saturday,...

Send flowers to the Edmonds family.