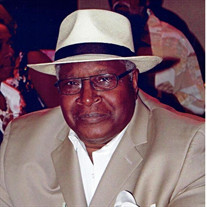 A Celebration of Life “For I am now ready to be offered, and the time of my departure is at hand. I have fought a good fight, I have finished my course, I have kept the faith: henceforth there is laid up for me a crown of righteousness, which the Lord, the righteous judge, shall give me at that day: and not to me only, but unto all them also that love his appearing.”(1 Timothy 4:6-8) Walter George Cooper, Sr, son of the late Roosevelt Cooper and Alberta J. Cooper Johnson, was born on July 13, 1939, in Lake City, South Carolina. He was the fourth sibling born of ten children. He was affectionately called “Wash” by family and friends, a nickname given by his father, which was also his grandfather’s nickname. In 1942, the family decided to relocate to Maryland, where they found residence in the Turner Station and Sparrows Point area. He accepted Jesus Christ as his personal Savior at a very early age and joined the fellowship of the St. Matthews United Methodist Church of Turner Station, MD, and later Ebenezer Methodist Church of Sparrows Point, MD, with his mother and siblings. Wash was a product of the Baltimore County School System, graduating from the Sollers Point High School in 1957. In school, he was very much involved in sports – ran track and played basketball. Right after graduation in 1957, he joined the United States Army where he served and received an Honorable Discharge. Wash met his high school sweetheart, Clarissa Whitt, when she was in 10th grade. After their courtship, they were united in Holy Matrimony on March 26, 1960 – a forever love for 61 years. Wash was blessed with five children: Diane, Walter, Jr., Daniel, Sr., Calvin, and Artis. They began their family life in Turners Station and Douglas Homes. With a growing family, they took up residence and found a larger home at 1214 N. Montford Avenue (East Baltimore). He raised his children with morals and family values, particularly his sons, who have become the great family men that they are. He loved his family – and that included his siblings and their families, as well as cousins and other relatives. The family made another move to Arnold Court, which has now become the home of their eldest son, Walter, Jr. After returning home from serving in the military, Wash gained employment at Bethlehem Steel, Sparrow Point, and Johns Hopkins Hospital. He then found employment with Western Electric Company in Baltimore from 1964-1984. In 1984, the company changed over to AT&T and relocated to two out-of-town locations, Richmond, VA, and Atlanta, GA. Wash, along with his wife, Clarissa, chose to relocate to Richmond where he worked until his retirement in 1996 after 32 years. After arriving in Richmond, he began attending the Trinity Baptist Church. He accepted the invitation, got baptized, and joined the fellowship with his wife, and daughter, DeeDee. Being an avid sports fan, Wash assisted with coaching the neighborhood baseball and basketball teams on Montford Avenue. He loved watching all types of sports, especially football games with his sons – “Go Ravens!”. In 1996, Wash and two other colleagues, Hayes, and Donald Harris, took on a great venture and opened a lounge/club in Atlanta, GA, and named it – “Tanqueray Lounge”. The lounge was geared towards the mature crowd, a popular spot where everyone enjoyed the atmosphere, good food, and having a good time. Wash was a people’s person, loved traveling and playing cards. He took great pride in his appearance, always “dressed to the nines!” While in Atlanta, Wash experienced health issues and returned to Richmond in 2013. He never complained and was always in good spirits. On the morning of Monday, October 4, 2021, God, in His infinite wisdom, called home another one of his soldiers, Walter George Cooper, Sr., to his eternal home. No more pain, no more suffering. He has reunited with his parents and his siblings, Clayton W. Burgess, Livingston Cooper, Roosevelt Cooper, and Joan Duppins. Wash leaves to cherish loving memories: his wife of 61 years, Clarissa Whitt Cooper (“Tinker”); five children, Diane (DeeDee) Cooper-Herrman; Walter G. Cooper, Jr. (Dawn), Daniel E. Cooper, Sr. (Jacqueline), Calvin G. Cooper (Stacy), and Artis Y. Lee; thirteen grandchildren, LaDawna, Kimberly, Aljerlear (AJ), Daniel, Jr., Ronald, Devin, Stephanie, Phylicia, Walter, III, Kaitlyn, Shane, Kayden, and Mason; twenty great-grandchildren; three brothers, William Cooper (Carla), Ernest Cooper (Molly) and Gilbert Cooper; two sisters, Dessie Moore and Alberta Curbeam (Nathaniel); sister-in-law, Gladys Lawson; nieces, nephews, cousins, other relatives, and friends. Wash has left an everlasting impression among all who knew and loved him. An extraordinary man who will greatly be missed but never forgotten.

A Celebration of Life &#8220;For I am now ready to be offered, and the time of my departure is at hand. I have fought a good fight, I have finished my course, I have kept the faith: henceforth there is laid up for me a crown of righteousness,... View Obituary & Service Information

The family of Walter George Cooper Sr. created this Life Tributes page to make it easy to share your memories.

A Celebration of Life
“For I am now ready to be offered, and...

Send flowers to the Cooper family.