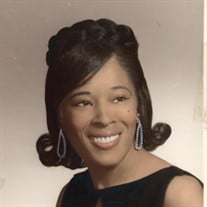 VIVIAN PEARL STAFFORD (nee Alford) was born on October 9, 1930 to the late Frank Lee and Thelma Vivian Alford (Tapscott) in Baltimore, Maryland. Vivian was the second of six daughters. She attended Paul Lawrence Dunbar Elementary and High Schools. As a young adult, Vivian developed a career at the Baltimore Spice Company (originator of Old Bay Seafood Seasoning). Known for her beauty, her grace, and impeccable style, she was recruited as a model for Henderson’s Fashions and Frederick’s of Hollywood, both of which were located in Baltimore. Later on, she became a bookkeeper for a local realtor, utilizing her outstanding organizational skills. A very industrious and caring person, Vivian had a reputation for her excellent culinary and homemaking skills. She helped to raise almost all of the children who were born into the family after her, including her younger sisters and her many nieces and nephews, several of whom were welcomed to live in her home at different times in their lives. Vivian spent her lifetime loving and caring for family and friends, and was the primary caregiver for both her mother and father in their final stages of life. Vivian’s home was always the center of the family life. On November 18, 1962, Vivian was united in holy matrimony with Delbert Wesley Stafford, now deceased. She was a former member of the Grace Memorial Baptist Church, which was the family church for many years. Vivian Pearl Stafford is preceded in death by two sisters, Geneva Lucus (nee Tapscott) and Juanita M. Shorts (nee Alford). She is survived by: three sisters, Brenda I. Alford (Dr. Jomills Henry Braddock, II), Kai Phillips (nee Alford) and Sharon Alford Cuffie; a host of nieces, nephews, cousins, great-nieces and great-nephews; and her beloved companion, George E. Joynes

The family of Vivian P. Stafford created this Life Tributes page to make it easy to share your memories.

Send flowers to the Stafford family.