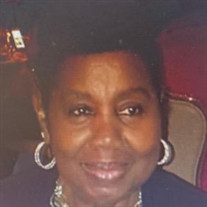 VIVIAN LOUISE RUSSOE, age 80, departed this life peacefully at home on September 04, 2021, of natural causes. She was born January 5, 1941 in Winston Salem, North Carolina to the late Thelma Mullins. She married Johnston James Russoe who was originally from Dallas, Texas in 1970. He preceded her in death in 2008. She was also loved and cherished by her longtime friend the late William Barnett. Vivian moved to Baltimore, MD in 1943 with her mother and sister, Mary. She graduated from Dunbar High School in 1959. After graduation she attended the Community College of Baltimore where she received her Associate’s degree in Human Services. One of her first jobs was at Spring Grove State Hospital where she met her late husband. Ultimately, she followed her passion for helping others working at Social Security Administration in the Office of the Inspector General from which she retired after 43 years of service. During her time at SSA, Vivian received various awards and accolades for her exceptional service in the federal government. During her young adult years Vivian was a part of the Ebony Social Club along with her best friend of 66 years Joan Hinton. The ESC participated in many community outreach programs such as clothing and feeding the homeless, sponsoring charity dinners, and hosting fun trips to expose people in the community to new experiences. Vivian was a member of Mt. Zion Hill Baptist Church for over 35 years. She was a member of the Welcome Committee & Church Choir and participated in Adult Sunday School and Bible Study. She experienced life to the fullest through her love of travel across the United States and abroad; her love and enjoyment of a delicious meal especially at her favorite restaurant, the Hazelwood Inn; her passion for fashion had everyone admiring her sharp wardrobe; her love of a good book; her impeccable ability to light up a room with her warm smile and loving spirit. Vivian is the SWEETEST ANGEL God will ever know. Vivian was loved and cherished by many. She is survived by daughter, Danita Russoe; son, Lawrence Russoe, Sr and daughter in law, Tongela Russoe; three sisters, Mary Rogers, Robinette Odom, and Renae Kearney (Herlend Kearney, Sr.). She was preceded in death by her brother, Lawrence Odom. She leaves to mourn grandchildren, Lawrence Russoe, Jr., and Kenneth Russoe; great-grandchildren Lawrelle Russoe, Daysean Russoe, and Jamari Russoe; nieces, Raechelle Roger-Scruggs (Keith Scruggs), Ebony Johnson, and Tonielle Parker-Brown (Danny Brown); nephew, Herlend Kearney Jr; and an abundance of great-nieces, greatnephews, other relatives and close friends.

VIVIAN LOUISE RUSSOE, age 80, departed this life peacefully at home on September 04, 2021, of natural causes. She was born January 5, 1941 in Winston Salem, North Carolina to the late Thelma Mullins. She married Johnston James Russoe who was... View Obituary & Service Information

The family of Vivian Russoe created this Life Tributes page to make it easy to share your memories.

Send flowers to the Russoe family.