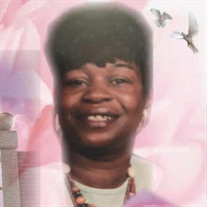 TO EVERYTHING THERE IS A SEASON AND A TIME FOR EVERY PURPOSE. ECCLESIASTES 3:1 Vivian Marie Williams, known as Lil Bits and Viv went home to be with the Lord April 3, 2021 surrounded with love by her family. As we gather today to celebrate her transition into eternal life with the presence of God her Lord and Savior. A TIME TO BE BORN. ECCLESIASTES 3:2 Born Vivian Marie William on January 3, 1948 in Norfolk,Virginia the baby child of the late James and Mary Eliza Williams. She was the caring and loving sister of her brother David Williams who is still living, James Williams and Rita-Jean Winston who preceded her in death. A TIME TO BE TRAINED. TRAIN UP A CHILD IN THE WAY HE SHOULD GO AND WHEN HE IS OLD, HE WILL NOT DEPART FROM IT. PROVERBS 22:6 Vivian began her education in Norfolk, Va. She graduated and obtained her high school diploma from Booker T. Washington High School in Norfolk, VA and completed her nursing education in Cincinnati, Ohio. A TIME TO BE SAVED- ...EXCEPT A MAN BE BORN OF THE WATER AND THE SPIRIT, HE CANNOT ENTER INTO THE KINGDOM OF GOD...JOHN 3:5 Vivian was raised in a home filled with love and understanding the importance to be saved and know the Lord for herself. At an early age, she accepted Jesus Christ as her Savior. She later joined New Antioch Baptist Church under the leadership of Bishop Orlando Wilson followed by membership at The River at Revial Mission Church under the leadership of the late Pastor T. Green whom she loved dearly, and then joined Victorious Ministries under the leadership of Pastor Tony Smith. A TIME TO LABOR - IN THE SWEAT OF THY LABOR SHALT THY EAT BREAD...GENESIS 3:19 Vivian began her labor as a Registered Nurse in Cincinnati, Ohio before moving to Baltimore, Maryland, where she continued her passion to care for others as a registered nurse at Church Home Hospital and Good Samaritan Hospital. Vivian would often work as a private duty nurse. Shortly after retiring Vivian began passionately caring for children in need. Vivian became a foster parent in 1994 with the Martin Pollak Project. Vivian is remembered for her ability to love and care for others and put her desires last. Vivian will forever be remembered for the countless number of children she cared for and took care of. Vivian enjoyed planning and taking trips, hosting events, eating seafood, cooking and feeding others. Vivian had a love for planting and gardening and caring for her pet fish. A TIME TO BE WITH THE LORD: ... LET ME DIE THE DEATH OF THE RIGHTEOUS... NUMBERS 23:10 Vivian will be sorely missed by all those who knew and loved her. However, the legacy of love and happy memories that she created will linger in our hearts forever. We thank God for His blessings and the opportunity that we had to love and cherish her in our lives. Vivian leaves to honor and cherish her memory: sons, Reginald "Reggie" and Jerrell Key who preceded her in death; son, Jamil and one and only daughter, Luvora (Dante Miller); grandchildren, RaeZae' (Antonio), Shaneka, Izaiah, James, Taylor, Jazmyne, Murphy, Dante Jr., DeAsia, Dionshey, Javonte "Doogum", Jaquawna, and Javonia; great-grandchildren, Kaz'Mia, Bryson and Antonio Jr., godchildren, Brian Murphy, Nicole Anderson, Andrea Tanner, Tammie Sanders, Zandra Dean, James Hunter, Shawnetta Fowler, Lisa Long and Barry Horton Sr. who precedes her in death; best friends, Betty Logan, Trina Jackson, Angela Johnson, Karen Waites, Wanda Stewart, Alberta Grant, Sandra Collins, John and Priscilla Eley, Ernestine Tanner-Holder, Clementine Bell and Louise Williams; special friends, Kevin Harden, Doris Murphy, Reginald Molock, Abraham Johnson; closest nephews, Ronnie and Rodrick; closest nieces, Renee Lomax, Sheila Lomax, Jean and Lynette Wilson who preceded her death; a special sister-in-law, Juanita Jeffries who preceded her in death, numerous nieces, nephews, and a host of other relatives and friends.

TO EVERYTHING THERE IS A SEASON AND A TIME FOR EVERY PURPOSE. ECCLESIASTES 3:1 Vivian Marie Williams, known as Lil Bits and Viv went home to be with the Lord April 3, 2021 surrounded with love by her family. As we gather today to celebrate... View Obituary & Service Information

The family of Vivian M. Jefferies created this Life Tributes page to make it easy to share your memories.

TO EVERYTHING THERE IS A SEASON AND A TIME FOR EVERY PURPOSE....

Send flowers to the Jefferies family.