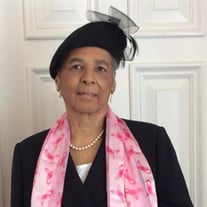 On Friday morning, July 16, 2021, God in His infinite wisdom and love whispered, “come on home my child” to our beloved Vivian Marie Fowlkes Holmes. She responded and made the peaceful transition into His presence. Vivian was born on June 2, 1940 in Baltimore, Maryland to the late Walter Morton Fowlkes and Ruth Booker Fowlkes. We believe they welcomed her with open arms. She was the third child born into this family of love. From early beginnings, Vivian (Sissie as she affectionately became known) shined as a leader and an inspiration to the family and others who came in contact with her. At a very early age, Vivian gave her life to Christ and was baptized at the Fountain Baptist Church, where she remained a faithful member until she joined the Mt. Zion Hill Baptist Church later in life. She loved her church and was a faithful servant in the work of Mt. Zion Hill Baptist Church. She served as the teacher of the Adult Sunday School Class, was member of the Missionary Ministry, Christian Education Ministry and was editor of “Sissie’s Soul Food Kitchen”, a featured article in the Mt. Zion Hill Review. Vivian was a servant, a giver, a participant! She supported her church and its activities well and willingly. Not only was Vivian active in her church, but she also participated in and conducted Christian workshops at various churches in and outside of the city and the state. She was a long-time member of the Wednesday Noon Day Bible Class at New Psalmist Baptist Church. Vivian successfully completed courses in Christian Education and Studies of the Bible at the Baltimore School of the Bible. As a young adult, Vivian was married to Roland Hayes Holmes. (Deceased). This marriage ended in divorce many years ago. Of this union, one son, Marc Hayes Holmes, was born. Marc now resides in Florida. Vivian was educated in the public schools of Baltimore City and graduated from the Paul Lawrence Dunbar Senior High School in 1956. She continued her education at the Morgan State College where she earned a Bachelor’s Degree in Mathematics in 1960. In later years, Vivian received a Master’s Degree in Public Administration from the University of Baltimore. Her professional career included employment in math/engineering positions, business management, and in human resources with the Federal Government. Because of her work ethic and performance, she received many citations and awards. Vivian retired from the Social Security Administration in 2004. Alpha Kappa Alpha Sorority was a highlight of her life. December 2021 will mark 64 years since Vivian and 24 other young women were initiated into Alpha Kappa Alpha Sorority, Inc. at Morgan State College - now University. Her leadership skills were apparent from the beginning, and she was elected Vice President of the group. Through the years, Vivian served on several committees, culminating in organizing and planning for the development and operation of the Epsilon Omega Foundation during its formative years. She was a Golden Life Member of the sorority. “Whatever I am going through, Jesus knows and cares about it. He cares about Me” “Living a life in service to God brings Joy.” These were her themes during her illness. Vivian was predeceased by her oldest brother Walter E. Fowlkes and her youngest sibling, Joseph Connell Fowlkes. She leaves to cherish fond and beautiful memories and a legacy of love to her loving son Marc H. Holmes; devoted sister Lillian Gundy Person; dear brother, Charles R. Fowlkes; two sisters-in-law, Katherine Fowlkes (Charles) and Geraldine Fowlkes (Walter); one nephew, Nathan M. Gundy, III; one niece, Vicki Jones; a host of other relatives,extended family, and devoted friends - especially the Yah Yahs and the Pinochle Group. She fought a good fight. She finished her course. She kept the faith and now she’s wearing the Crown of Victory. To God Be The Glory! We will miss you. We will love you forever!

On Friday morning, July 16, 2021, God in His infinite wisdom and love whispered, &#8220;come on home my child&#8221; to our beloved Vivian Marie Fowlkes Holmes. She responded and made the peaceful transition into His presence. Vivian was born... View Obituary & Service Information

The family of Vivian F. Holmes created this Life Tributes page to make it easy to share your memories.

Send flowers to the Holmes family.