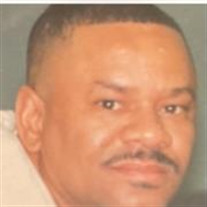 VINCENT E. WATKINS, SR., son of the late Samuel and Charlotte Watkins, was born on March 21, 1954 in Baltimore, Maryland. He departed this life on Friday, October 22, 2021. Vincent was educated in the Baltimore City Public School System. From childhood, at the age of six years old, he had his eyes on Karen Street; they married and had three children. His confidante and best friend, Vincent E. Watkins, Jr., left his father devastated when he passed on February 8, 2013. For sixteen years, Vincent joyfully served the community through employment with the City of Baltimore and made streets passable during inclement weather, even through many bouts of illness. He also worked a few years for the railroad company. Vincent loved the Ravens so much that he decided to work at the Ravens Stadium part time. On off- days, Vincent was never missing from his grandsons’ sport events, especially football. During his downtime, a card game was his close companion. One fact about Vincent was that he truly loved his entire family. He was oh so proud of his grandchildren Savoy Jr., Lavon, Lavell, Torryn and Maray. They called him Pop-Pop. His brother Calvin was his right-hand man. Vernon and Vaughn were also his best friends. Vincent had a special bond with Lavon because he looked so much like his grandfather Sam. He enjoyed taking Von to school everyday, up and ready at 5:00 a.m. Vincent was preceded in death by: his parents, Samuel and Charlotte Watkins; son, Vincent Watkins Jr.; sisters, Sylvia Fair, Harriet Watkins, Roberta Tabb, Rita Watkins; and brothers, Theodore Watkins, Raymond Watkins, and Arthur (Charlotte) Patterson. Vincent leaves to cherish his memory: the love of his life, confdante, best friend and wife of 47 1/2 years, Karen Watkins; his son, Lavoy Watkins Sr.; his loving daughter, Tia; his sisters, Delores Epps, Thelma Mason, Patricia Watkins; and brother, Calvin Watkins (Teresa); mother-in-law, Estelle Scott; sisters-in-law, Vondalear Powell and Sandra Wright (Louis); a host of other relatives and friends.

VINCENT E. WATKINS, SR., son of the late Samuel and Charlotte Watkins, was born on March 21, 1954 in Baltimore, Maryland. He departed this life on Friday, October 22, 2021. Vincent was educated in the Baltimore City Public School System. From... View Obituary & Service Information

The family of Vincent Eugene Watkins, Sr. created this Life Tributes page to make it easy to share your memories.

Send flowers to the Watkins, family.