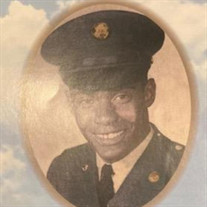 VINCENT STERLING GRIFFIN SR. was born on October 11, 1946 to the late James and Elizabeth Griffin. Vincent departed this life on Monday September 20, 2021, after a longtime battle of comorbidities. Vincent Sr. was educated in the Baltimore City Public School System. After high school he joined the U.S. Army where he proudly served his country on the front line in the Vietnam War. He was honorably discharged in the late 1960’s. After his discharge Vincent became employed with The Baltimore City Housing Authority; after 15 years of employment with the housing authority, Vincent became employed at The Maryland House of Corrections where he worked 20 years and retired in 2008. He was a member of Zion Baptist Church and then joined Sweet Mercy Baptist Church. Vincent had many titles, but provider was the one that everyone knew him by. No matter what happened in this life, Vincent always made it a priority to provide for his wife and children. Vincent was a devoted husband and father; he always put his wife and children’s needs before his own. Vincent was the true definition of a Man, Father and Provider. Vincent was preceded in death by his son, Vernon Griffin, and two brothers, Ronnie and Craig Griffin. He leaves to mourn, his loving devoted wife, Martha; two sons, Vincent Jr. and Craighton (LaVonne); daughter, Bardot (Alton); two nieces, that he raised as daughters, Francine and Shelaine (Tony); brother, Johnny; four grandchildren, Curtis, Khadeja, Denira, Zion; great-grandson, Haywood Jr.; brother-in-law, Pernell; four sisters-in-law, Barbara, Brenda, Veronica and Marie; uncle and aunt, William and Josephine Jackson; a host of nieces, nephews, cousins, friends, and also his dog Mocha.

VINCENT STERLING GRIFFIN SR. was born on October 11, 1946 to the late James and Elizabeth Griffin. Vincent departed this life on Monday September 20, 2021, after a longtime battle of comorbidities. Vincent Sr. was educated in the Baltimore City... View Obituary & Service Information

The family of Vincent S. Griffin created this Life Tributes page to make it easy to share your memories.

Send flowers to the Griffin family.