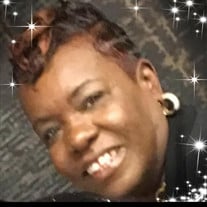 Legacy of Love The abiding love of a mother, God-mother, daughter, sister, aunt, and friend. Vickie Devon Jackson was born in Winston-Salem North Carolina to the late Stevenson Jackson and Carol Hill Jackson on November 13, 1957. She was the oldest of five children. Nicknames include Miss Vickie, Mama Vic, and Kitty. She was educated in the Elizabeth New Jersey school system, receiving her diploma from Battin High School. She received an Associates Degree in Business from Mercer County Community College, West Windsor, New Jersey. Vickie accepted Christ as her Lord and Savior in 1986 through Witherspoon Street Presbyterian Church, Princeton, New Jersey. She joined her home church, Mount Olive Baptist Church in 2011 and was a member of the Wedding Ministry. Vickie worked at New Jersey Bell, which eventually became Verizon for over thirty years. Once she retired, she relocated to the Greater Richmond Virginia area. She continued to work in payroll and accounts payable. Most recently, she was employed by Apria Healthcare. Vickie was a very supportive and generous person with a warm smile and a big laugh. Her greatest joy in life was being a mother to her son. She loved her nieces and nephews as well as her family members. She was dependable, dedicated, and always showed up to lend a hand, and get in where she fit in. She loved home decor, fashion, jewelry, and Christmas. She loved family gatherings. Whenever Vickie was taking pictures, she always said she had to put her lipstick on first. She has been a true blessing to us all. Vickie's passing was sudden and unexpected. She will truly be missed. She was preceded in death by her father, Stevenson Jackson of Irvington, NJ., and her nephew, Shareef Bashir Burton of Elizabeth, NJ. She leaves to cherish her memory her only son, Christian Jeremiah Hayes; her only godchild, Tashara Taylor, beloved mother, Carol Jackson; three sisters, Kathy Burton (Arista), Carolyn Debnam (James), and Stephanie Reid; brother, Steven Jackson (Diana); sister-cousin Towanda Hill Warren; one aunt, Queen Ann Walker; and a host of nieces, nephews, and cousins.

Legacy of Love The abiding love of a mother, God-mother, daughter, sister, aunt, and friend. Vickie Devon Jackson was born in Winston-Salem North Carolina to the late Stevenson Jackson and Carol Hill Jackson on November 13, 1957. She was the... View Obituary & Service Information

The family of Vickie Devon Jackson created this Life Tributes page to make it easy to share your memories.

The abiding love of a mother, God-mother, daughter,...