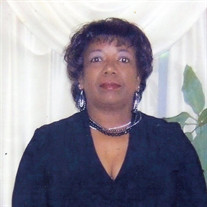 Legacy of Love The abiding love of a mother, Vernita Jo Harris Webber who lived in Henrico Country, Virginia transitioned from time to eternity on Sunday, Nov. 7, 2021. Though her departure was untimely, her life had an amazing impact on all who encountered her beautiful spirit. Vernita received her formal education in Richmond Public Schools and obtained an earned degree from the University of Arizona. She worked tirelessly to provide the best home for her family as a wife and mother. Throughout her life she worked a few different jobs. She spent the most time at Suntrust Mortgage until she pursued her career as an Entrepreneur. Vernita Webber was the proud owner and administrator of The Madison House. There was not a role or position that was beneath her. She was a woman who was focused on impact, full of ambition, and completely people oriented. Vernita was the epitome of what it means to be selfless. Her example and stewardship made others great. Everything that she touched was made with love. Vernita, a boss, an entrepreneur, a friend to all and ultimate caregiver loved her residents and workers so much; she considered them her family. When you think of her you can’t help but be reminded of sunshine. Vernita Webber is a brighter day personified. The cloud of witnesses to receive her include her mother, Wilhelmenia Harris; grandmother, Frances Perkins; uncle, John Henry Harris; brothers, James, Jerome, Donald, Michael, Reginald and Gregory; sisters, Shirley and Betty; and a niece, Felita Sayles. Her Legacy remains in the hearts of her husband, James Webber, daughter, Alexis Webber; mother-in-law, Ruth Williams; four brothers, Vernell, Tyrone, Aletron, Ronald and William (Janice), 3 sisters, Carolyn, Michelle, and Cynthia (Raymond). Family was such an important thing to her and she gained bonus siblings who she held dear to her heart. Those siblings are Leroy “Yarbo”, Norma, Cedric, Michael, and Charlissia “Lisa”. She leaves to cherish a host of nieces and nephews among them one devoted and known as a second daughter, Shondria Harris. Her natural ability to make friends was unmatched and had no boundaries. People loved her from Virginia to Bangkok but no one could take the place of her best friend Jewel Faison. Vernita supported her daughter Alexis in everything she did with everything she had and picked up additional children away. She was an avid team mom, choir mom, work mom and later road/industry mom. India, Sofiat, Brandon, Donte’ and Donald; grew up as siblings and loved Vernita until the end. Vernita Webber is deeply loved, will be truly missed and will always be cherished. As she rest with God may she forever live in our hearts.

Legacy of Love The abiding love of a mother, Vernita Jo Harris Webber who lived in Henrico Country, Virginia transitioned from time to eternity on Sunday, Nov. 7, 2021. Though her departure was untimely, her life had an amazing impact on... View Obituary & Service Information

The family of Vernita Harris Webber created this Life Tributes page to make it easy to share your memories.

The abiding love of a mother, Vernita Jo Harris...

Send flowers to the Webber family.