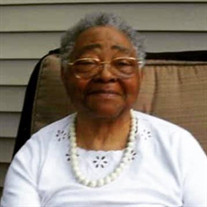 Vernetta Lavern "Sug" Dunn McClain, daughter of the late Everette Louis and Corinna Williams Du199nn, was born November 25, 1934, in Wake County, North Carolina. She was preceded in death by three brothers, Everett Herman, James Thomas, and Bert Nelson Dunn. Vernetta was reared as a country girl in Knightdale, North Carolina, with siblings. Her dad nicknamed her (Sugar), which affectionately shortened to "Sug". She was taught and learned the value of serving God, hard work, and loving people. At an early age, she attended Good Hope Baptist Missionary Church, Knightdale, NC, under the leadership of the Rev. Claude R. Trotter, where she accepted Christ as her personal Savior. John 3:16, For God so loved the world, that he gave his only begotten Son, that whosoever believeth in him should not perish, but have everlasting life. "Sug graduated from James E. Shepherd High School, Zebulon, North Carolina. She attended Shaw College, which is now a university. She also graduated from the Baltimore School of The Bible in 1992. Although education was high on her list, being well dressed and stylish was her way; off to work, she went! Influenced in her early twenties by a fond aunt, Maggie, and sister Eliza she moved to Baltimore, Maryland. While a resident of Baltimore, Vernetta joined Sweet Hope Free Will Baptist Church under the leadership of the late Bishop John T. Crummedy in 1967. Bishop Chilean Smith, Sr., followed by Rev. Terry G. Thornton whom continue to be her covering pastor where she remained active until her health began to fail. While at Sweet Hope, she was a member of the Senior Usher Board, ?Sunday /School, VBS, and other ministries, including Outdoor and Street Ministry, Nursing Home, Soup Kitchen, Clergy Ministry including the Progressive Freewill Baptist Conference. God called Evangelist McClain into the Gospel Ministry. She boldly shared the good news of Jesus always encouraging her family and those she met. She preached her initiatory sermon on June 23, 1985. Her scripture came from Luke 14:17, "Come; for all things are now ready; with a message entitled, "Come Over Here". Vernetta met and married the late Fred (Frank) D. McClain and parented two blessed children, Consetta and Ashley. Vernetta's public work included healthcare by way of private duty, nursing homes, and hospital services. She retired from Good Samaritan Hospital as a Nursing Assistant. Her hobbies included redesigning hats, dresses, coloring, gardening, cooking for family gatherings, and dressing sharp. She was a loving mother, grandmother, great grandmother, sister, aunt, sister- in-law, mother-in-law, godmother, and trusted friend. She was a woman of God, a homemaker, and a Disciplinarian (LOL), who loved crocheting and a good laugh. Although in a long-term care facility for 12 years, God remained her constant companion, protector, and provider. On Sunday, December 26, 2021, God beckoned to her and said, “Sug, my grace has been sufficient for thee: and my strength was made perfect in your weakness… your time departure is at hand, for you have fought a good fight and you kept the faith. Cherishing her memory and celebrating new life is her daughter Consetta Good (Jim); son, Ashley McClain (Rolanda); grandchildren, Jason (Davida) of Virginia, Terica Mackey (Nicholas) and Trinity McClain; great-grandchildren, Abigail, Gabrielle, Savannah, and a bonus child Jaylan; sisters, Eliza Pearl McKoy and Evangelist Bessie Carol Dunn Smith (Bishop Chilean Smith, Sr.) of Baltimore MD, Elise Earl Womack of Zebulon, NC and Barbara Diane Settles (Rev. Lenwood) of Raleigh, NC; brothers, Clarence (Prophetess Beatrice) of Raleigh, NC Clifton Rufus Dunn (Tempie) and Stanley of Raleigh, NC, Bishop Arnell Issac (Minister Lillian) and Rev. Sherell Lynn Dunn (Faye) of Knightdale, NC; one sister-in-law, Barbara Givens Dunn; one brother-in-law, Melvin Gill Both of Raleigh, NC; and a host of nieces and nephews; godchildren Unsel Dunn and Joni Brown. Mom had several endeared friends; however, Mother Louise Baynard often referred to herself as the 14th Dunn child. To God Be All The Glory!

The family of Vernetta L. McClain created this Life Tributes page to make it easy to share your memories.

Send flowers to the McClain family.