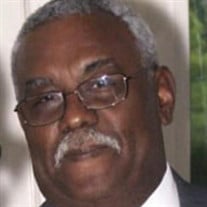 VERNARD LEE RICHBURG, 73, of Baltimore, Maryland, passed on April 8, 2022, after a battle with long term illness. He was born to Robert Lee and Ora Lee Richburg in Manning, South Carolina on August 19, 1948. He was baptized at Friendship Baptist Church on November 5, 2000. He married Genevieve Consuella “Connie” Richburg on March 4, 1994, and they lived together in Baltimore, Maryland. Together they raised 2 children: Victoria Davis (Isaiah Davis) and stepdaughter, Shawann Henderson. Vernard graduated from Douglass High School on June 10, 1966 and completed some course work in Electronics at Catonsville Community College in 1984. He served in the US Air Force for four years as a Fire Control System Technician and in the US Coast Guard for four years as an Electronic Technician. He received many accolades in honor of his military service. In 1984, Vernard, also known as “Vern” or “Rich”, became employed as an Electronic Technician with Westinghouse Electronic Corporation of Baltimore, Maryland. He displayed great work ethics, integrity, and trust in his tenure at Westinghouse and in 1988, he was promoted to Service Manager. In 1990, Westinghouse merged with and became Northrop Grumman. Vernard continued his career at Northrop Grumman and in 2017 he retired with 36 years of service. He received many awards for his loyal service from both Westinghouse and Northrop Grumman. Rich was a quiet, giving man. He played the lottery often and won big. He would always find it in his heart to share his winnings with those closest to him. He enjoyed the outdoors, loved bike riding on long trails and long scenic drives. In his free time, he loved to go fishing at Choptank River and the Conowingo and Loch Raven Dams. He would come home smelly but have tons of fish for Connie to cook. He caught so many fish that he would share them with the neighbors. Rich enjoyed bowling as well. He was a member of the American Bowling Congress where he earned the Triplicate Award for scoring 3 game series with identical scores. He was fascinated by airplanes. He would often go to aviation events to watch the planes take off and pilots perform in the sky. Rich was a simple man who enjoyed small gatherings with family and friends from time to time. But his ultimate love was work. He was a provider and a protector and made sure his family lived well. He leaves to mourn wife, Genevieve Richburg; daughter, Victoria Davis; son-in-law, Isaiah Davis; stepdaughter, Shawann Henderson; four grandchildren; Aubrie Davis, Quenta Brown, Naz Henderson and Aja Johnson; two brothers, Jerome Richburg, and Johnny Brogdon; two sisters, Rodia Walters and Lula Carter; one brother-in-law, one sister-in-law, nieces, nephews and host of other relatives and friends.

VERNARD LEE RICHBURG, 73, of Baltimore, Maryland, passed on April 8, 2022, after a battle with long term illness. He was born to Robert Lee and Ora Lee Richburg in Manning, South Carolina on August 19, 1948. He was baptized at Friendship Baptist... View Obituary & Service Information

The family of Vernard Lee Richburg created this Life Tributes page to make it easy to share your memories.

Send flowers to the Richburg family.