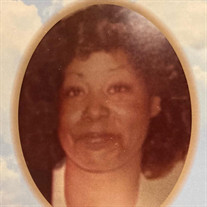 On today we celebrate and memorialize the life of VANESSA DARLENE ROBINSON. She was born on May the 9, 1959 in Baltimore, Maryland to Gene H. Robinson and Olestine Monroe. As a young child, she lived with her family both in Danbury Connecticut, and later moved to Baltimore, Maryland where she attended the Baltimore City Public School System. Vanessa grew up in a very close-knit family where it was expected for the children to show respect to the elders and to live up to high standards of responsibility. Her grandmother, Josephine Monroe, lived a few blocks from the family. When growing up the children would often visit their grandmother where they would help with chores around the house and receive guidance and instruction. Christmas and Thanksgiving were special days for the family, full of decorations, celebration, fun and laughter that culminated with a 13-course meal with five or six sweet potato pies. It was during these times that the family could experience the joys of family unity and Christ. Vanessa a somewhat precocious child, she excelled from her teenage years to young adulthood quickly and was very independent and mature for her age. By the time she was 22 years old, she had moved from Baltimore to Philadelphia, secured employment, and purchased her own new car, and lived on her own. Her brother Gene lived with her for a short time while she was in Philadelphia. Vanessa held several jobs during her life, most prominently she worked for Blue Cross and Blue Shield in Baltimore and Philadelphia. She also worked at various jobs in insurance claims and office administration. Vanessa often enjoyed talking about God and the Bible, and she would ask her brother Gene, oftentimes, to read the Daily Bread to her. Vanessa’s faith was evident by the comments that she would make and the questions that she would ask about God. Vanessa departed this life (after a short bout with illness), on February 20, 2022 at Union Memorial Hospital. She was preceded in death by her parents, Gene H. Robinson and Olestine Brown and her brother, Edward Johnson. Vanessa’s memory will be forever cherished by: her partner in life, Ronald Doswell; her brother, Gene C. Robinson; three nieces, four nephews, a host of aunts, uncles, cousins, other relatives and friends.

On today we celebrate and memorialize the life of VANESSA DARLENE ROBINSON. She was born on May the 9, 1959 in Baltimore, Maryland to Gene H. Robinson and Olestine Monroe. As a young child, she lived with her family both in Danbury Connecticut,... View Obituary & Service Information

The family of Vanessa D. Robinson created this Life Tributes page to make it easy to share your memories.

On today we celebrate and memorialize the life of VANESSA DARLENE...

Send flowers to the Robinson family.