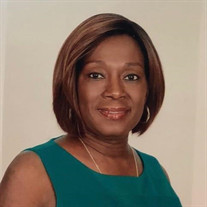 VALERIE PAULETTE BAKER-BURKS, daughter of Nanie Fair and late Edward Fair, was born in Baltimore, MD on July 23, 1961. On May 22, 2021, God decided to bless Valerie with the gift of eternal life. Valerie received her education in Baltimore County & Baltimore City Schools system. She graduated from Lake Clifton High School in 1979. Valerie continued her education at Gordon Phillips in 1988 to study cosmetology and Medix School as a Phlebotomist Tech Assistant. Valerie was employed as a hairstylist at Mr. Baker’s Beauty Salon for many years. She followed her dream as a phlebotomist at Quest Diagnostic. She also worked at Capital Women’s Care of Baltimore. Valerie was passionate about her work with helping others and meeting new people. In fact, it was not work for her, it was her joy and delight to help her work family in any way she could. Valerie’s mother installed religion in her early that she gave her life to Christ at the age of 11. She was a member of Greater St. John Baptist Church of Turner Station under the leadership of Rev. Arthur Ben. She sang in two choirs (Ben’s Specials & Angelic Voices of Christ). Valerie loved walking her four-legged companion (Collin), listening to music, watching her daughter’s Karis music videos and action movies. She would flood Facebook with Karis singing. Her favorite movie was Rush Hour. Most of all she loved spending time with family. She had a special bond with her favorite cousin, Wayne. Their roots made them cousin and their hearts made them inseparable friends. You couldn’t pull these two apart if you wanted to. One of Valerie’s proudest moments was witnessing her son, Carrician, graduate from Morgan State University in 2006. The only thing she wanted out of life is for her children to be successful. Valerie leaves her legacy of love and care to her family: Nanie Fair (mother), Carrician Fair (son), Karis Baker (daughter), Sherin Brown, Constance Fair, Djuana Fair (sisters), Oran Fair, Carl Fair (brothers); sister-in-law Trina and Collin (four-legged companion). Juanita Harris, Ernestine Nelson of Raleigh, North Carolina (aunts); a host of nieces and nephews and extended family: Amy Baker, Ivan Baker, Max Baker, Dean Baker and Henry Baker Jr.; Wayne Evans (special cousin); Sylvia Grijalva of Arizona (special long-time friend); Lisa Wade (special friend). Valerie was preceded in death by extended family Jeffery Baker.

VALERIE PAULETTE BAKER-BURKS, daughter of Nanie Fair and late Edward Fair, was born in Baltimore, MD on July 23, 1961. On May 22, 2021, God decided to bless Valerie with the gift of eternal life. Valerie received her education in Baltimore County... View Obituary & Service Information

The family of Valerie P. Burks created this Life Tributes page to make it easy to share your memories.

Send flowers to the Burks family.