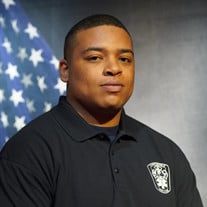 Legacy of Life TyVaughn “Ty” Nathaniel Eldridge was born on July 3, 1995 in the city of Columbus, Ohio to Thomas Eldridge and Ragene’ Carter. He was preceded in death by paternal grandparents Goldie Upton and Nathaniel Eldridge. At the early age of 16 he accepted Christ and was a member of Holy Rosary Catholic Church. He received his formal education and graduated from Henrico High School class of 2013. He continued his education at Old Dominion University graduating with a degree in Criminal Justice in 2017. TyVaughn has always served his community and fulfilled his lifelong goal to become a firefighter, which would have opened more opportunities, to make a positive difference, to everyone he touched. He was employed with Chesterfield Fire and EMS Department and had previously worked at Cover VA as a supervisor. He enjoyed playing the trumpet, basketball, baseball, painting, traveling to music concerts, and giving back to the community. In 2008, he was one of the first youth to attend Henrico Police Athletic League’s summer program and once he aged out, he then became a youth counselor. In addition, TyVaughn served as an officer on the PAL Youth Leader-ship Council. He would continue his service to the community after graduating from Old Dominion University volunteering as a mentor with Gap4Lyfe. He leaves in cherished memories his loving parents Ragene’ Carter and Thomas Eldridge; siblings Malaki Carter and Samaria Carter-Long. Grandparents Karen B. Carter and John Carter Sr. (Carolyn). The love of his life and college sweetheart Kenya Gray. Parents in love Eddie and Sonda Gray. His goddaughter who he adored so much, Tatum Faines. Devoted aunts Shaniece Carter-Sammons (Derick) and Terra Smith, Brenda Dafney and Emily Lewis. Uncles John Carter III (Chanel), Richard, Charles, and John Upton. Devoted great uncles Eric and Steve Brown. Godparents Sonya Washington and Richard Jenkins. Devoted Cousin William Spindle Jr., sister and brother-in-Christ Sydney Gray and Alex Walker. Special friends Andrew Lewis, Doug Faines, Christopher McQuinn and Derrick Williams. Devoted family friend Jonathan Parham, a Village of Aunties, and a host of other relatives and friends.

Legacy of Life TyVaughn &#8220;Ty&#8221; Nathaniel Eldridge was born on July 3, 1995 in the city of Columbus, Ohio to Thomas Eldridge and Ragene&#8217; Carter. He was preceded in death by paternal grandparents Goldie Upton and Nathaniel Eldridge.... View Obituary & Service Information

The family of TyVaughn Nathaniel Eldridge created this Life Tributes page to make it easy to share your memories.

Send flowers to the Eldridge family.