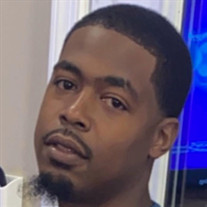 Tyree Shamon Carroll, Sr. was born on May 17, 1990 in Richmond, Virginia to Sophia M. Carroll and late Kevin T. McFall. He was preceded in death by his father, Kevin McFall; maternal grandmother, Ernesteen Carroll; paternal grandparents, Shirley McFall and Charles Fitz; brother, MaurQuan D. Brown and uncle, Barry Persons. Tyree attended Richmond and Henrico Public Schools. He graduated from Henrico High School but with his sense of self-confidence and assurance he refused to walk across the stage when he graduated because the personal fanfare wasn’t needed, he knew what he had accomplished. By trade, Tyree was a construction worker. At an early age, Tyree was baptized at Christian Tabernacle Baptist Church in Richmond, VA and held dear to the principles of love, respect and being morally sound. Being the first born, Tyree was a natural protector, even as a child. He was very family oriented and brought a lot of people together. As a father, Tyree was always there for his children teaching them right from wrong, how to be responsible and respectful and he was strict on his girls. He held his children and others accountable, so he was not to be played with. He could hold a grudge and be stubborn at times and wasn’t afraid of anything, not even showing emotions. Tyree liked to eat, especially his favorite food, cereal. He will forever be remembered for being a proud and caring father, for his love of family and friends, for his jokes and being a role model who was adored by his children, nieces and nephews. Tyree S. Carroll, Sr. leaves to cherish his memory: his mother, Sophia M. Carroll; fiancé, Chanice T. Jones; sons, Kamron S. Richardson, Tyree S. Carroll, Jr., Tariq S. Carroll and bonus son, Demond Randolph; daughters, Makiyah S. Ruffin, Kemaia S. Sims and bonus daughter, Chanel Randolph; grandparents, Tyrone A. Carroll, Sr. and Sheila Fritz Dunlap; brothers, K’von R. Carroll, Vegas Reed and Ernest S. Pressley; three sisters, Kiera T. McFall, Dalisa Campbell and devoted sister, Shyreeka H. Carroll; uncles, Tyrone A. Carroll, Jr., Michael Fitz, Tyrone and Antwan McFall; aunts, Sherlita McFall and Kimberly Bryson; a host of nieces, nephews, cousins, other family members and friends of them, devoted cousin, Karon Jones and devoted friend, Kapprielle L. Sims.

The family of Tyree Shamon Carroll Sr. created this Life Tributes page to make it easy to share your memories.