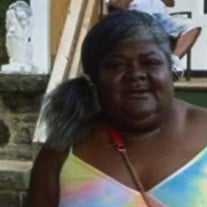 TRENIA DORETHA CONAWAY was born on July 4, 1960 in New York City. She was born to Mr. James Eades Sr. and the late Mrs. Vindola Elaine Eades. On January 30, 2022 this angel gained her wings. Trenia Conaway received her education in the Baltimore City Public School System where she was raised and lived. She graduated from Forest Park Senior High School then later earned her CNA certifcation. She worked at many places where she enjoyed taking care of people. Trenia accepted Christ as her Lord and Savior which started from her Mom, Elder Eades. Trenia went on in life to be married twice: to Wallace Graham in which gave her her frst child, the late Tarlita Graham; then she married the love of her life, the late Ernest Henry Conaway III, in which gave her her two boys, Ernest Conaway IV and Dominic Conaway. Trenia was a loving, devoted and praying mother, grandmother and great-grandmother. She was loved by everyone who met her because of her loving style and warm-hearted ways which helped her spread that enjoyment of her love to people. She will truly be missed by all. She leaves to cherish her memory: her two sons, Ernest and Dominic Conaway; daughter-in-law, Tynika Conaway; nine grandchildren, Donnell Conaway, Ernest Conaway V, Tahiri Conaway, Malasha Barnes, Makyi Milon, Dominic Conaway Jr., Myiea Mion, Destini Conaway, and Myone Milon; three great-grandchildren, Zaylen Barnes, Nova Conaway, Makyi Milon Jr.; her father, James Eades Sr.; three sisters, Letitia Evans, Tonya Anusie-Howard and Juanita Johnson; one brother, James Eades Jr.; two brothers-in-law, James Toliver and Felix Anusie Sr.; a host of nieces, nephews, other relatives and close friends. But most importantly, her life partner for over twenty-fve years, Mr. Larry Sydnor who was with her during the last moments of her life. She would miss him as he does her. She will see again in her death her mother Vindola Eades, daughter Tarlita Graham; two husbands, Wallace Graham and Ernest Conaway II; sister Tarlita Toliver, brother-in-law Richard Howard and sister-in-law Sydrea Eades; and favorite aunt Myra Ford.

TRENIA DORETHA CONAWAY was born on July 4, 1960 in New York City. She was born to Mr. James Eades Sr. and the late Mrs. Vindola Elaine Eades. On January 30, 2022 this angel gained her wings. Trenia Conaway received her education in the Baltimore... View Obituary & Service Information

The family of Trenia D. Conaway created this Life Tributes page to make it easy to share your memories.

Send flowers to the Conaway family.