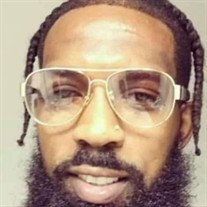 Celebrating Life Travon Marquis Brinsen Beloved “Tu” I have fought a good fight, I have finished my course,I have kept the faith: Henceforth there is laid up for me a crown of righteousness, which the Lord, the righteous judge, shall give me at that day: and not to me only but unto all them also that love his appearing. II Timothy 4: 7-8 (KJV) Travon peacefully entered into eternal rest at his home, Sunday, July 25, 2021. He was born on October 28, 1981, to Marvin Brinsen and Tracey Brice. Tu accepted Christ at an early age. He received his formal education in Henrico County Public School System and graduated from Henrico High School in 1999. Though known for his great smile and neatness, Travon was very ambitious about life and always aimed for greatness in everything he set out to do. Being an entrepreneur was no exception. For the past four years, Tu was self-employed as an Utz Distributor. To his friends and neighbors he was “The Chip Man.” The greatest joy of Travon’s life was the birth of Jhalia, his daughter. He was a Tampa Bay Buccaneers fan and loved playing pool. Cars were also one of his passions and Tu kept his cars clean as the board of health. Travon was preceded in death by his maternal grandmother Hazel V. Anderson and paternal grandmother Pauline Roberta Brinsen. Tu leaves to cherish his memory daughter, Jhalia Brinsen; beloved mother, Tracey Brice (Darryl); father, Marvin Brinsen; sister, Tranesha Brinsen; twin brothers, Tramal and Tramel Whitaker; several aunts, Melody and Kimberly Turner, Ashley Anderson-Jackson, Vanessa Billie-Anderson, Cassandra Williams and Karen Brinsen; uncles, Keith and Carlton Brinsen; nieces, Tramiyah Saunders, Jamia Morris and Nyla Whitaker; nephew Jamar Morris Jr.; a host of cousins, including devoted Timetria Turner; and other family and friends.

Celebrating Life Travon Marquis Brinsen Beloved &#8220;Tu&#8221; I have fought a good fight, I have finished my course,I have kept the faith: Henceforth there is laid up for me a crown of righteousness, which the Lord, the righteous judge,... View Obituary & Service Information

The family of Travon Marquis Brinsen created this Life Tributes page to make it easy to share your memories.

Send flowers to the Brinsen family.