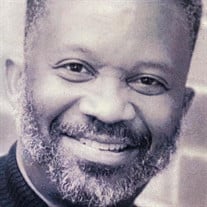 Tony Darnell Cosby was born in Richmond, Virginia on April 8, 7955, to the late Willie D. Cosby III and Shirley Mae Cosby. Tony held close to his heart his fondest memories of growing up in "Bungalow City " on Virginia Avenue with his sister, Sheree Taylor, and brothers, the late Timothy R. Cosby, George Cosby, and Willie D. Cosby IV. He accepted Christ at an early age and was baptized at Mt. Zion Baptist Church in Mechanicsville, Virginia. Tony's faith played an important role throughout his life and his bible was well-read and treasured, Whenever you visited Tony, his Bible was always by his side. A "worn and torn" testament to his faith and how he kept God at the center of his life. Tony attended Fair Oaks Elementary and as a child, he loved to play sports with his Uncle David Cosby and family in the yard at their homeplace. He continued his early childhood education at Fairfield Junior High School and graduated from Highland Springs High School in 7973,where he made history as the "First Black Quarterback" to start on the football team. He was later inducted into the Highland Springs "Wall of Fame". Tony's love for football continued throughout his college career at Bowie State University in Bowie, Maryland. While attending Bowie State, he pledged Alpha Phi Alpha Fraternity and met many of his life­ long friends. He graduated with a Bachelor of Science degree in Speech, Theatre, and Performing Arts. Upon graduation, he returned home to further pursue his passion for Theatre & Performing Arts and began his professional acting career working with Theatre IV, where he landed the role of Dr. Martin Luther King. This role inspired Tony to start "Theatre & Co", his own business, where he produced and directed original stage plays and brought to life the work of famous African-American playwrights, such as Lorraine Hansberry's "A Raisin in The Sun" and August Wilson's "Fences" for the Richmond community and surrounding areas. Tony also worked for the Richmond Public School system at JFK Kennedy High School and spent some time working in the family business, Willie D. Cosby III Contractors. In between working, Tony traveled to colleges and universities, museums, libraries, and churches across many states re-enacting Dr. King's speeches for over 35 years. Even though Tony did not look like Dr. King, when you heard him perform "I Have a Dream " and "I've been to the Mountaintop" you felt that Dr. King was in the room. In addition to re-enacting Dr. King's speeches, Tony toured and presented Jeff Stetson's stage play "The Meeting" a fictional story about an imaginary meeting between Martin Luther King Jr. and Malcolm X at a Harlem hotel in the height of the Civil Rights Movement . Tony was working on his autobiography entitled "Walking in the Shoes of King" which his family hopes to publish in 2022. Aside from his passion for working hard and performing, Tony's "Pride and Joy" was his family, especially his loving daughter Kristin Cosby and grandchildren, Kynnedi and John Henderson III. Tony would light up at the mention of their name. He instilled the importance of story-telling and encouraged his grandchildren to use their imagination. Kynnedi and Myles enjoyed drawing, playing outside in the garage, eating Mentos candy, watching movies, and listening to Michael Jackson with "Papa T". He leaves to cherish his memory, his loving daughter, Kristin D. Cosby, grandchildren Kynnedi and John Henderson, III; mother, Shirley Cosby; one sister, Sheree Taylor; two brothers, Willie IV "Kake" (Joy) and George "Butch" (Bridget) Cosby; nine aunts, Della Cosby Coverton, Lois Brown, Carolyn Brown (Warren), Patricia Cosby, Linda Taylor (Barry). Helen Hayes, Carolyn Anderson (Roland). Alice Tart and Thelma Cosby ; and a host of nieces, nephews, cousins, other relatives, and friends. One devoted friend, Patrick X Smith. Tony never met a stranger, was a fearless leader, a phenomenal actor, and enjoyed life to the fullest. We thank God for the life of the one and only, Tony Darnell Cosby, our very own "Dr. King"! Free at last. Free at last. Thank God almighty, he's free at last.

Tony Darnell Cosby was born in Richmond, Virginia on April 8, 7955, to the late Willie D. Cosby III and Shirley Mae Cosby. Tony held close to his heart his fondest memories of growing up in "Bungalow City " on Virginia Avenue with his sister,... View Obituary & Service Information

The family of Tony Darnell Cosby created this Life Tributes page to make it easy to share your memories.

Tony Darnell Cosby was born in Richmond, Virginia on April 8,...

Send flowers to the Cosby family.