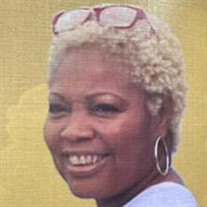 Tondria Denise Simon-Allen was born on July 2, 1965, to Solomon, Jr. and Lucy Simon in Baltimore ,Maryland. She was their only child. Her father precede her in death. She was affectionately know as "Ton" and was raised in Southern Baptist Church, where she accepted Christ as her personal Savior at an early age. She grew in the Word of God, ministry of the church, and leadership. Tondria served in various youth ministries and was President of the Young Adult Choir. She was an active student in the Sunday School. Later, Tondria was a Master Life Class instructor when she served as the Mt. Pleasant Church and Ministries. She presently continued growing in Christ and serving the Lord at New Psalmist Baptist Church. Tondria served the Lord with gladness and was a bold witness of His love and grace. Ton was educated in the Baltimore City Public School System. She graduated from Baltimore City High School (now known as City College). Her social circle was large and included the group "Vanity Six". She enjoyed the alumni fellowships each year at Homecoming. After graduating, she studied at Baltimore Studio Hair Design School, and earned her Cosmetology license. She pursed each of her God-given visions, and after 30 years, returned to school to study Culinary at the Baltimore International Culinary School. She furthered her education at Arundel Community College, where she earned her Culinary Arts degree. Tondria was visionary and was dedicated to seeing her visions come true. Her career started as a stylist as Coco Hair Salon in Baltimore, MD. At a young age of 18, she became a salon owner, opening her first salon, Main Headquarters. In her words, "You only fail if you never try." She later opened her second salon, Celestial. During that time, she was a platform artist for Dudley, which allowed her to participate in numerous hair conventions; local, national and international. She showed her amazing talents in local hair shows and competitions. Her passion for hair maintenance was the key factor in growing her salon into Celestial Beauty Center and Day Spa. She worked her way up to being a Senior Cosmetologist and unselfishly shared her gifts with others by training and mentoring numerous young ladies to obtain their cosmetology licenses. After being a successful salon owner and stylist for several decades, Tondria pursued her lifelong passion for cooking, inspired by her late grandmother, Thelma Thorpe. She interned at Oriole Park for two years. As a true entrepreneur, she started Sweet Treats, which expanded to Celestial Catering featuring Sweet Treats by Tondria. She catered countless corporate parties, meetings, politician parties, funerals, weddings and other special events. She kept dreaming and decided to house both businesses at the exact location. The first floor of her salon was converted into a commercial kitchen and venue, while the second floor remained a hair salon. In 2019, she completely transformed Celestial Beauty Center and Day Spa to Celestial Catering. In 2020, Ton prepared over 16,000 meals for World Central Kitchen, an emergency food relief program. The business continues to thrive. Tondria started to work with the National Kidney Foundation in 2014. She participated in Sante' 2014; A Culinary odyssey, where she prepared a meal among 45 local, featured chefs. The annual event is in recognition of World Kidney Day. Tondria was a legend and an icon in her own right. Everything she touched was a success, from coordinating her hair show, Garden of Eve, to owning multiple successful businesses. She was loved by many and was a great role model to many young people. Ton always finished what she started and was ready for the next move. She was very sociable, energetic, and ready to party. In October 2015, Ton met Phillip Allen at an event at Morgan State University, and later that night, they had their first date. Their relationship grew on love and trust in the God who joined their union, and on August 31, 2019, Tondria and Phillip were wed. The two were happy in love and inseparable as they fellowshipped, worked and worshipped....together. She was a strong, dependable, loving person who always put God first. Family, like family and close friends were dear to Tondria's heart. She was excited for each milestone her sons made. She loved and encouraged Tyler's drawings and Therone's writings. Both sons assisted her and worked often in the café. She and her mother, one of her "golden girls" shared a wonderful, loving mother/daughter relationship. Ton was always in the company of people who were like-family or close friends. Her smile was infectious, and those friendships were rooted in love. The Lord called our beloved Tondria to her eternal home early on Friday, April 30, 2021,after a brief illness. She leaves t cherish fond memories: her husband, Phillip Allen, Jr.; sons, Tyler and Therone; mother Lucy; stepchildren, Temika, Nakia, Monet (Telvin), and Phillip III; brother, Solomon Simon, III (Dionne); sister-in-law, Cheryl Kenner; nephews, Malik and Solomon Malik; niece, Taijah; aunts, Deare (Nat), Adell, Artivee and Cynthia; uncles, Anthony and Leroy; goddaughters, Cache' and Dora; best friends, Cindy Pierce and Brunette Crittenden; and a host of cousins, close friends, and colleagues.

Tondria Denise Simon-Allen was born on July 2, 1965, to Solomon, Jr. and Lucy Simon in Baltimore ,Maryland. She was their only child. Her father precede her in death. She was affectionately know as "Ton" and was raised in Southern Baptist Church,... View Obituary & Service Information

The family of Tondria Simon-Allen created this Life Tributes page to make it easy to share your memories.

Send flowers to the Simon-Allen family.