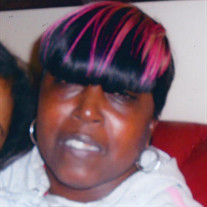 ,TIRZAH M. SIMPSON was born on August 1, 1960 to Leonard Miles and the late Bernice Simpson Johnson. She peacefully transitioned to her heavenly home on Monday, December 20, 2021. There, Tirzah was warmly welcomed by her mom and sister, Wanda, as well as her caring and supportive grandparents Tirzah was educated in the Baltimore City Public School System, graduating from the Paul Laurence Dunbar Senior High School. She attended Coppin State College for a short while and later became a state certified beautician. She practiced her trade at one of the beauty shops owned by Mr. Baker in Old Town. Keeping her hair “looking good” was one of her life-long passions and she encouraged others to do the same. She was an “overcomer”. More than 20 years ago, she decided not to allow anything to deter her from becoming her best self – a more whole person. She trusted God’s love for her and was assured that He would provide the strength she needed to overcome any obstacles that might come her way. She simply was “A Good Person” and she was an asset to her family and friends whom she constantly encouraged. Tirzah was a praying woman who prayed for her family daily. She was a member of the New Psalmist Baptist Church when it was located on Franklin Street, across from the main branch of the Enoch Pratt Library. She had a very nice voice and loved to sing; so, she became a choir member. The church’s relocation and her work schedule interfered with her continued participation. Her employment history was varied; but she found her calling in the Hotel Industry. She worked the front desk at one of the downtown hotels; and was later employed by Microtel, located near BWI Airport. She worked there for several years and was instrumental in hiring staff for various positions. She was replaced when a new management company came in to operate the hotel. After a brief break, Tirzah had the good fortune to be hired by The Hilton Hotel which became Double Tree by Hilton. She became a supervisor in the housekeeping department and also participated in some management training classes. She was well versed in her responsibilities and always lead by example. “Miss T” as she was affectionally called was a small person but a dynamo in action. She cared about her job, loved what she did and gave it her all. Tirzah was a family person and she enjoyed spending time with her dad, her sisters and her aunts. She liked going out to eat, loved the strawberry sundaes from Dairy Queen, and liked having a “stash” of butter pecan ice cream in her freezer when watching the DVD’s, she collected. This could’ve become a habit she picked up from her dad. His DVD collection is so huge that he could open a rental store. Tish will truly be missed by her family, friends and co-workers alike. Our loss is heaven’s gain. Tirzah leaves to cherish her memory: her Dad, Leonard Miles (Sophia Scott); sisters, Jackie Johnson, Marcinah Carter, Lechadora Miles-Moody (Terrence), Lynea Morrison; uncles, Benniel “Chucky” Simpson, Andre Miles and Ronald Miles; aunts, Christine Holly, Sylvia Fisher, Brenda Simpson, Gloria Harris, and Eraina Spady; and one goddaughter, Latia (Tia) Kittrell (her beautician). She also has many cousins, nieces and nephews as well as great nieces and nephews. She was preceded in death by her Mom, Bernice Johnson, sister, Wanda Johnson, grandparents, Leola Mason, James W. Miles, Benniel and Fannie Simpson, and several aunts and uncles. “

,TIRZAH M. SIMPSON was born on August 1, 1960 to Leonard Miles and the late Bernice Simpson Johnson. She peacefully transitioned to her heavenly home on Monday, December 20, 2021. There, Tirzah was warmly welcomed by her mom and sister, Wanda,... View Obituary & Service Information

The family of Tirzah M. Simpson created this Life Tributes page to make it easy to share your memories.

Send flowers to the Simpson family.