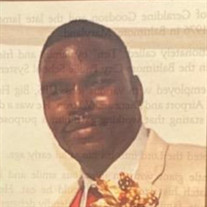 TIMOTHY JAMES DAVIS departed this life unexpectedly to be with the Lord on May 14, 2021. Timothy, son of Geraldine Goodson and the late James Davis, was born May 31, 1976 in Baltimore, Maryland. Timothy, affectionately called “Tim” by family and friends, received his education in the Baltimore City Public School System. Timothy was employed with various jobs: UPS, Big Fish Car Wash, Chimes @BWI Airport and Dietz and Watson. He was a dedicated hard worker, often stating that working gave him a purpose in achieving his goals. Timothy accepted the Lord into his life at an early age. He was a gentle giant with an infectious smile and laugh and an appetite to match his size, and boy could he eat. He enjoyed the Annual Cookouts, family gatherings and friendly debates with cousins and uncles about sporting events. He loved sports and music (he could even dance a little bit.) He never left the cookouts without a “doggie bag,” Large of course. His mother enjoyed cooking meals for him often saying, “Boy, do you ever get full? ... you are eating me out of house and home”, while preparing his doggie bag. Timothy was a jokester. He called his aunt saying, “Give me my million dollars and bank card. You know you got it.” She told him, “Boy you know you don’t have a million dollars.” Also telling his cousin, “Give me the keys to my Infinity.” Funny thing, Tim could not drive. These and many other fond memories will always be remembered. We will always love you“Tim”. Leaving to rejoice his memory are: his mother, Geraldine Goodson; sisters, Ella Davis and Kimberly Davis (brother Raymond Brown preceded him in death); nieces, Yolanda Brown, Quiera West, Regine Cormley and India Carter; nephews, Jermaine Griffin, Quinn Showacer; and a host of aunts, uncles, cousins, great-nieces and -nephews

TIMOTHY JAMES DAVIS departed this life unexpectedly to be with the Lord on May 14, 2021. Timothy, son of Geraldine Goodson and the late James Davis, was born May 31, 1976 in Baltimore, Maryland. Timothy, affectionately called &#8220;Tim&#8221;... View Obituary & Service Information

The family of Timothy Davis created this Life Tributes page to make it easy to share your memories.

TIMOTHY JAMES DAVIS departed this life unexpectedly to be
with...