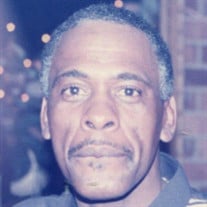 Legacy of Love God is my protector and all and all. Thomas Lee Taylor, aka “TL” was born November 30, 1944 in Richmond, Virginia. He was the beloved son of Viola Pickett whom she adored. He received his education in Richmond, Virginia and graduated from Armstrong High School. On December 13, 1969, he married Mary Thorne aka Gloria. They have 3 children Jerry Washington, Sharon and Sharlene Taylor. In 1965, he joined the United States Army and served in the Vietnam War with distinction and received Medals of Honor. Thomas aka “TL” returned to Richmond, Virginia after receiving an honorable discharge. He later was employed by American Tobacco Company for 13 years. He furthered his employment and served more than 30 years at the United States Postal Service in Richmond. He knew so many people and was always commended for doing such a great job carrying the mail. Thomas took pride in how well he did his job. He was one of the best mail carriers known. “TL” was also the owner and operator of a cleaning company where he serviced corporate businesses within the Richmond area for 26 years. “TL” was a jack of all trades and such a hard worker. Thomas was known for his outstanding personality and he always had a glorious smile. Everyone who had the privilege of meeting him loved him. “TL“ had the ability to make people feel good because of his infectious smile, sense of humor, welcoming manner and the way he greeted people. He loved oldie but goodies music, loved to dance and was always the life of the party. He also enjoyed basketball, cars, and played with the U.S. Postal baseball team. “TL” also loved his family and making sure that his property and yard was in order. He always wanted the best for everyone. Thomas Taylor was such an easy going person as he treated everyone with kindness and respect. He was preceded in death by his sisters, Bernice Jones and Margaret Taylor; brother, Charles Winfried Taylor and sisters in-law, Lenora Taylor and Louise Gill Edwards; brothers-in-laws, Freddie Gill, James aka Bay Bay Gill, Bernard Gill and Charles Gill. Our beloved Thomas leaves to cherish his memory a loving wife, Mary Taylor aka “Gloria”; son, Jerry Washington Sr.; two daughters, Sharon and Sharlene Taylor; grandson, Jerry Washington Jr. aka “JJ” and Marquise Taylor; granddaughters, Sheree Washington, Janelle Washington and Tonesha Taylor; great-granddaughter, Haley Washington; brother, Raymond Pickett (Terri); sisters, Janette Hardy, Joyce Clark, Rose Lomax and Brenda Cole, brother-in- law, Edward Gill (Katrina) three sisters-in-law, Ruth, Wanda and Carolyn Gill, and a host of nieces, nephews, other relatives and caring friends.

Legacy of Love God is my protector and all and all. Thomas Lee Taylor, aka &#8220;TL&#8221; was born November 30, 1944 in Richmond, Virginia. He was the beloved son of Viola Pickett whom she adored. He received his education in Richmond,... View Obituary & Service Information

The family of Thomas Lee Taylor created this Life Tributes page to make it easy to share your memories.

Legacy of Love
God is my protector and all and all.