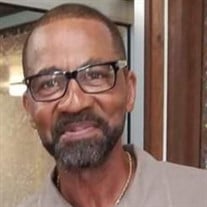 On Wednesday, May 12, 2021 at 10:44am the Lord stretched out his Hands and lifted his spirit into heaven. Thomas (Tommy) Carl Jackson, Jr. was born on Wednesday, June 11, 1958 in Richmond, Virginia to the Late Thomas Carl Jackson, Sr. and Madeline (Douglas) Jackson. He was educated in the Richmond City Public Schools Systems, where he made many lifelong friends. Thomas was fondly known as “Tommy” by his family and friends in Richmond, “Tom” by his aunts Sarah and Corrine and Old School by his Co-Workers in Maryland. Thomas loved the Lord, life, family, friends and people! He gave his life to Christ at an early age while attending church with his family at Shiloh Baptist Church, Richmond, VA where he sang in Young Adult, Male Choirs. Thomas married his childhood sweetheart Angie on April 4, 2011. She was a loyal and devoted wife who took great care of him during his illness, until the Lord saw fit to call him to his heavenly home. They loved worshipping together at Community Baptist Church where he sung in the Hurte Ensemble and the Mass Choir. Most near and dear to his heart were his children Terrell & LaNisha and the apple of his eye, his granddaughter Sa’Ryah. Thomas worked at several different companies as a painter, welder and flagger. His last place of employment was Highland Enterprise where he remained until his illness forced him to retire. He was a faithful, loyal member of Shiloh Baptist Church since childhood. When he moved to Maryland in 2011, he joined the Community Baptist Church, Jessup, MD. He came from a singing family and was part of the music ministry at both churches. I don’t think he really knew how good a singer he was, but I could listen to him for hours. Tommy hobbies included listening to gospel music and jazz, watching movies and his Dallas Cowboys. However, the most important thing in his life was taking care of Seniors. He would call them regular to see how they were doing, and to see if they needed anything. He ran errands, and would take them anywhere they needed to go. Tommy would also just sit and enjoying the conversations. Preceded him in death were his parents, Thomas Carl Jackson Sr., and Madeline Gee. He leaves to cherish memories, his devoted wife Angela Coppedge-Jackson, his son Terrell Jackson, daughter LaNisha Washington and his granddaughter Sa’Ryah Jackson. His brothers Anthony Jackson, Atlanta, Ga., William Gee, Bronx, NY and Hubert Gee, Atlanta Ga., three aunts Sarah Wright, Corrine Beard and Viola White, two uncles James Jackson and Irvin Mayo, from his blended family Delbert Bias & Loreal Hunter, three sister-in-laws, Margretta (Charles) Patterson, Charmaine Mills & Pauletta (Larry) James and one brother-in-law Delbert X Coppedge, and a host of family and friends, several devoted, just to name a few, Corky Brown, Bernard Sanders, Timothy Dumas, Sammy Gillard, Minister Cheryl English, & Deacon Jimmy Rogers.

On Wednesday, May 12, 2021 at 10:44am the Lord stretched out his Hands and lifted his spirit into heaven. Thomas (Tommy) Carl Jackson, Jr. was born on Wednesday, June 11, 1958 in Richmond, Virginia to the Late Thomas Carl Jackson, Sr. and... View Obituary & Service Information

The family of Thomas Carl Jackson Jr. created this Life Tributes page to make it easy to share your memories.