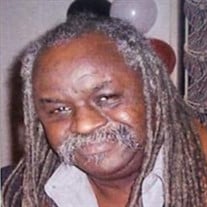 (BOOTY) THOMAS C. ADAMS JR., son of the late Thomas C. Adams Sr. and Gertrude I. Waters Adams, was born on October 13, 1950. Booty peacefully made the transition to another plane on June 23, 2021. Booty received his education at Polytechnic High School in Baltimore. He later was drafted into the military and departed with an honorable discharge. After returning home he attended and graduated from the Community College of Baltimore with a degree in music. He produced, wrote music and owned his own record label. He was always making sure family and friends were stocked with good music. He also was a regular commentator on the show Maryland Viewpoint and delivered several thought-provoking opinions and commentary. Booty graduated from Towson University where he received a degree in business administration. He never boasted or talked about his accomplishments in life. Booty could have you dying laughing or make you want to duke it out with his no-nonsense point of view. He loved posting pictures of family, fishing, writing, reading and talking to people. Booty’s life work was educating the community about Black/African History and he encouraged everyone he met to love themselves and their people. Booty retired from his career in business management and accounting upon his illness. He married the former Carol Everett, and out of this union came an adopted daughter Kimberly Barbour and two grandsons. Booty and Carol were married over 39 years but had a friendship that lasted 55 years, which was full of love, laughter, excitement and respect. Booty made numerous friends wherever he went and he never left a friend behind. He was always a true friend. He was devoted to his family and loved each and everyone dearly. Many called him “Big Cuz”. Booty was a protector of his family. He always said if there was a bear coming; it would have to come past him first. He leaves to mourn: his loving and devoted wife, Carol “Nu” Adams; loving daughter, Kimberly Barbour; two grandsons, Kai and Kaiden; two sisters, Mary C. Adams, Robyn Bailey; one brother, Lester Adams; three sisters-in-laws, three brothers-in-law, two aunts, two uncles, a multitude of nieces, nephews and a host of cousins and friends that will miss him dearly. Booty always said he is a representation of all the families, The Adams, Waters, Becketts and Beals

(BOOTY) THOMAS C. ADAMS JR., son of the late Thomas C. Adams Sr. and Gertrude I. Waters Adams, was born on October 13, 1950. Booty peacefully made the transition to another plane on June 23, 2021. Booty received his education at Polytechnic... View Obituary & Service Information

The family of Thomas "Booty" C Adams Jr created this Life Tributes page to make it easy to share your memories.