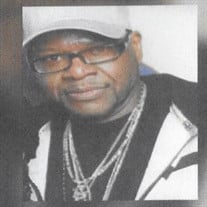 Theodore Betts Jr. affectionately known as "Teddy", "Theo", and "Man" was born on June 13, 1967. The son of the late Theodore Pete Betts Sr. and loving mother Minerva Towns. Teddy as he would rather be called suddenly gained his wings on Saturday, February 27, 2021. He was a member of Good Shepherd Baptist Church where he was baptized and gave his life to Christ. Teddy loved many songs and listened to music a lot on his down time. I can't help but say he deeply cared for Donnie McClurkin "We Fall Down but We Get Up" which was on his play list. Shirley Caesar and Patti Labelle.... Lord, you couldn't tell him nothing once he was in his zone. However, the song that stuck out the most during these few years was "Grateful" by Hezekiah Walker. Although he faced many health struggles, he constantly stayed up lifted and continued to work hard to overcome these roadblocks. He was a very strong Man with a "Big Crazy Heart". Theo attended Forest Park Senior High School, where he received his high school diploma. Later, he started his career in maintenance working for Seton Hill Manor Nursing & Rehabilitation Center. Here he mastered many skills, made many friends and formed several relationships including when he met the love of his life, best friend, and headache Wanda Carter, and her son Donnell, who he helped to raise as his own son. They were together for a year when his daughter Krystal was born. She quickly became the most important lady in his life. In August 2000, Teddy and Wanda were married and were still married at the time of his passing. In addition to his love for his kids and wife, he was big on family. There was never a time when someone called and needed him that he was not there. Once you passed his test and he trusted you, the love and support he gave showed that he has just made you family and its not backing out of it. The best thing he loved the most about having family, is during events and family gathering when he was able to to become "Chef T" which was his main passion. When he was in the kitchen everything stopped and he let his love for cooking take over. You could not tell him his food didn't taste better than at 5 star restaurant after, as he stated "He put his foot in it". He also enjoyed being in the kitchen with his late mother-in-law Rowena E. Carter. From his spaghetti to his shrimp salad and even his deviled eggs, he always made sure love was put in everything he made. "Daddy" or "Mr. Teddy" was also what so many of his daughter and son friends called him. He may not have been their biological father but if they got out of line and he found out about it, they would not here the end. He felt that family is not just blood. It is also about who is willing to hold you down and be there for you when you may need a hand the most. Theo extremely loved his grandchildren. "Poppie" as he was known by them could not do any wrong in their eyes, he meant the world to them. He did not like to be called granddad or pop pop since it made him feel old, although his oldest grandchild in which he called "Trouble" would remind him of how old he was during their daily jokes towards each other. From the many little cooking lessons with his granddaughter "Smoo", to the conversations while watching TV with "Fatty" and "Des". Not missing his daughter's stepsons "Deonta" and "Deon" birthdays with making sure he puts in something that they would love. They all had a bond that could not be broken, and they knew how important they were to him. He loved them very much and wanted nothing but the best for them. Preceding him to glory his father, Theodore P. Betts, Sr., grandmother, Ruth Townes, mother-in-law, Rowena E. Carter, and a brother-in-law Jerome A. Graham, Jr. Theodore leaves to cherish his loving memory; wife Wanda D. Betts; mother Manerva Townes; father in law: Stanley Carter Sr.; two children Donnell D. Carter and Krystal C. Betts; six grandchildren Ja'Maya Carr, Adrionna Carter, Adrea Carter, Destinee Carter, Renee Brown, Deonta Carter and Deon Carter; three goddaughters Sherri Paige, Natasha Coleman and Emily "Muffin" Thomas; two sisters: Karen Betts and Yolanda Betts-Cornish; two brothers: Daryl Robinson and Theodore Betts Jr.; five aunts Frances Townes, Barbara Williams, Antionette Williams, Martha Griffin, and Bridget Griffin; five uncles: Sylvester Skeeter, Alphonso Betts, Keith Betts, Kenneth Betts, and James Yancey; six sister in law's Valencia Graham, Shanna Carter, Remel Watson, RaMona Brown-Carter, ReNee Carter, Deborah Fitch; four brother in law's: Brian Carter, Stanley Carter Jr.; Larry Fitch and Nelson Carter; six very close friends Celestine Smith, Clara Smith, Charmaine "Michelle" Haynes, John Madison, Albert Davis Jr., Sheldon "50" Brooks and a host of other relatives and friends who loved him dearly.

Theodore Betts Jr. affectionately known as "Teddy", "Theo", and "Man" was born on June 13, 1967. The son of the late Theodore Pete Betts Sr. and loving mother Minerva Towns. Teddy as he would rather be called suddenly gained his wings on Saturday,... View Obituary & Service Information

The family of Theodore Betts created this Life Tributes page to make it easy to share your memories.

Send flowers to the Betts family.