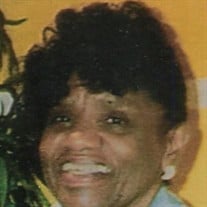 Legacy of Love In my Father’s House are many mansions; if it were not so, I would have told you. I go to prepare a place for you. John 14:2 Thelma L. Bullock, was born on February 28, 1935, in Cumberland, Virginia to the late Hathaway and Luevenia Gilliam. Thelma transitioned from her earthly home to her eternal resting place with our Lord and Savior on Monday, March 21, 2022. At an early age, Thelma moved to Center Moriches, Long Island, NY where she received her educational foundation and graduated from Center Moriches High School in 1954. Thelma accepted her Lord and Savior at an early age and was a faithful member of the First Baptist Church of Riverhead, Riverhead, NY. Thelma later became a member of Antioch Baptist Church, Varina, VA where she continued her faithful service and was active in several ministries. On June 16, 1956, she married her sweetheart, Melvin Bullock. They enjoyed 54 full years of love. Together they raised one son Jonathan D. Bullock. In 1978, Melvin and Thelma relocated the family to Richmond, Virginia where she was employed with SunTrust Bank for over 30 years. During her employment at SunTrust, she not only was a dedicated employee, but she was also a loyal friend to those she met. She retired from Sun Trust after a successful career to care for her husband Mel. Thelma took joy in the service of others, and she was always willing to share herself and lend a helping hand. She enjoyed traveling, shopping, spending time with family and friends, gardening, and watching game shows. She had an acute appreciation for fashion. She was regal and selfless, and her elegance and grace were unparalleled. She was a humble servant and devotedly committed to her faith. To know her was to absolutely love her. She was a PHEONOMENAL WOMAN! Thelma leaves to celebrate her life and cherish her memory, her loving devoted son Jon; and a host of family and friends.

Legacy of Love In my Father&#8217;s House are many mansions; if it were not so, I would have told you. I go to prepare a place for you. John 14:2 Thelma L. Bullock, was born on February 28, 1935, in Cumberland, Virginia to the late Hathaway... View Obituary & Service Information

The family of Thelma L. Bullock created this Life Tributes page to make it easy to share your memories.

In my Father’s House are many mansions;
if it...

Send flowers to the Bullock family.