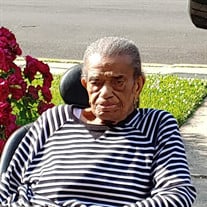 Thelma Johnson Buckson started her life journey on May 21, 1921, and received her angel wings on January 21, 2022, going home to be with the Lord. The daughter of the late Maggie (Jones) and Lewis Johnson, Thelma took pride in her family, and often spoke fondly of her years spent as a young girl growing up in "the country" of (Blackstone, Va.) and would reminisce and laugh with her siblings about their childhood. She was educated in the Nottoway County Public School System in Virginia. Upon completion of her education, she moved to New York City. While living there, she worked as a housekeeper for a short period of time. She then moved to Baltimore, Md., where she met and married her late husband Birlie Buckson. They became the proud parents of Velver and Warren. As a couple, they became members of Friendship Baptist Church, where she remained a member fro more than 75 years. During her working years, Thelma worked as a seamstress for Peck and Peck Clothing Store and as a Baltimore City Health Department health aide. While working for the Health Department, she also worked as a labor and delivery nursing aide at St. Agnes Hospital during the evening. She would remain employed there until her retirement in 1981. Affectionately known as "the Brain," there was very little she could not do or did not know something about. Her ingenuity allowed her to fix just about anything. Retirement did not slow her sown. At the age of 82, she managed to snag a boyfriend, the late "Uncle George." The two spent countless hours working on Warren"s rental properties. Thelma always had a warm, welcoming personality. There was never a time that you couldn"t have a conversation with her and join in with her infectious laugh! She loved visiting with relatives and friends, going on rides, and watching people dance and having a good time. Thelma often spent hours talking on the phone and sharing her stories. Upon her death, she joined her late husband Birlie Buckson; daughter Velver; brothers Harvey and Eugene (Buck); and sisters Ruth and Vivian. She leaves to cherish her memory; son Warren and daughter-in-law Tina; adopted daughter (Bunnie); special nieces Virginia Harrison and Renee Hilliard; close friends: Miriam Herring and Michael Dorsey; caregivers Angie Imana Rose and Mary Baynard; and a century's worth of loved nieces, nephews, cousins and friends.

Thelma Johnson Buckson started her life journey on May 21, 1921, and received her angel wings on January 21, 2022, going home to be with the Lord. The daughter of the late Maggie (Jones) and Lewis Johnson, Thelma took pride in her family, and... View Obituary & Service Information

The family of Thelma Johnson Buckson created this Life Tributes page to make it easy to share your memories.

Send flowers to the Buckson family.