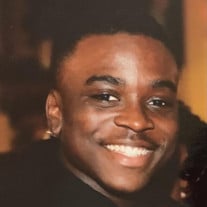 Terrance Jaylen “Isaiah” Easter, age 20 was called home on Saturday, August 21, 2021. He was born at MCV hospital in Richmond, Virginia on October 25, 2000 to Clarence and Sherita Easter. He was raised from birth as a member of Agape International Ministries and was christened at the age of 8 months. We knew early on that Terrance was preparing for a career in music by all of the crying he did around the house (lol). He attended Henrico County Public Schools where he participated in his first school concert in elementary school. He began his love for music while playing in the band in middle school where he played the saxophone, cello and violin. Terrance graduated from Henrico High School, where he spent three years as a drum major for the Mighty Warriors Marching Band. Terrance also studied theater for three years at Henrico County Center for the Arts. He gained a lot of his dance training while performing in The Nutcracker Sweet for two years. Terrance wanted to become a professional performer. He landed a role as a Scarecrow in the Busch Garden’s Jack is Back. Terrance also performed in the plays Pippin, Newbies, Cinderella, The Addams Family and Once on this Island. Terrance was preceded in death by this grandfather, John Pleasants and grandmother, Betty Jean Pleasants. Terrance leaves to cherish his memory his father, Clarence Easter Jr., mother, Sherita Trent Easter; grandfather, Clarence Easter Sr. and grandmother, Josephine Easter; one sister, Shedaryl Trent; three brothers, Daryl Trent Sr., Cequan Easter and Ketwan Easter (Tiara); five uncles; Sylvester Easter, Joseph Trent, Shawn Pleasants (Lakisha), Sherrod Pleasants and Michael Thomas; one aunt, Michelle Thomas; eight nephews, Shamon, Daryl Jr., Zaqai, Noah, Cameron, Ketwan Jr., Zyire and Brayden; two nieces, Aubrei and Kaylei; Godmother, Rebecca Branch; two devoted friends, Shania Gibson and Michaiah Noble; and a host of cousins, other relatives and friends.

Terrance Jaylen &#8220;Isaiah&#8221; Easter, age 20 was called home on Saturday, August 21, 2021. He was born at MCV hospital in Richmond, Virginia on October 25, 2000 to Clarence and Sherita Easter. He was raised from birth as a member of Agape... View Obituary & Service Information

The family of Terrance Jaylen Isaiah Easter created this Life Tributes page to make it easy to share your memories.

Send flowers to the Easter family.