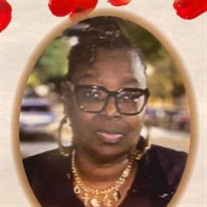 SYLVIA JOHNSON (nee Tates0, daughter of Mattie Webster and Alfonzo Tates, Sr., was born on October 12, 1968 in Baltimore, Maryland. Sylvia accepted Christ at a young age. She then joined the Rising Sun Baptist Church. Sylvia received her education in the Baltimore City Public School System. She majored in many trades such as hair, nails, child care and more. Once she became ill, she became a stay-at-home mom to many. Sylvia was a beautiful person inside and out. She became a mom to many a friend to many, and an aunt to many. To know Sylvia was to love Sylvia. She opened up her home to many. If she could help out in any way, she did. Sylvia is survived by: her husband, Clifford Moore; three daughters, Tasherria Boyd (Jesse), Erika Johnson and Dajanara Johnson; three sons, Alfonzo Tates III, Eric Johnson Jr. and Demalik Miguel; two granddaughters, Alaysia Smith and Anyla Smith; her mother, Mattie Webster (Edward); her father, Alfonzo Tates Sr.; her stepmother, Ingrid Vincent; two brothers, Alfonzo Tates Jr. and Alonzo Tates; two sisters, Ingrid Robinson and Tracey Robinson; her favorite aunt, Linda Wells; and a host of godchildren, nieces, nephews, aunts, uncles, cousins and friends.

The family of Sylvia Renee Johnson created this Life Tributes page to make it easy to share your memories.