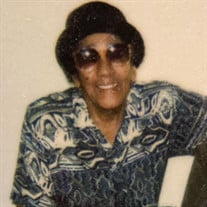 SUSIE FISHER JACKSON was born on October 4, 1924 to Robert and Virginia Fisher of Cumberland County, Virginia. She departed this realm on April 4, 2022 while in care at Harbor Hospital, in Baltimore, Maryland. She was immensely ill and unable to care for herself. Fortunately, her granddaughter, Inger came to her rescue and assumed the responsibility of her care. Susie was the seventh of eight children (William, Gordon, Robert, Arthur, Katherine, Queenie, and Minnie) all of whom predeceased her in death. They were a close-knit family ( especially her sisters) and it is our hope that they are TOGETHER again, through the power of GOD! Susie was married to John Henry Jackson (Jack) for twenty-nine years and to that union two children; Jerry Carlyle ( d/March 1997) and Adrien Eileen (d/ January 2022) were born. They were the loves of her life. Jack, as he was known, preceded her to heaven on March 1976. He was a kind and gentle man who valued nice clothes, a drink with his friends on the weekend and most of all his family. He was a happy person and lived a good life. Susie attended and completed a nursing care program very early in life and worked at that vocation and other pursuits until her children were born. She returned to the work force as a domestic goddess after her children started school. She was always in demand by many employers; they actually fought over her, kept raising her pay to retain her. After the death of a special work family for an extended amount of time, she returned to her nursing endeavors and retired from that vocation. Susie was an excellent cook and we all lived for her Sunday cakes! Her home was always open to family who needed a place to stay while attending college, searching for employment or just needed a safe place to recoup. Valley Street was always full of laughter, family and good food. She always had time for a friend and gave much needed advice to who ever needed it. Her honesty, open mindedness and willing to share her life experiences, were a blessing to many, especially to her grand kids who lived close by. She was an independent woman who believed strongly in family and GOD! She always held her head high (literally) and never gave into negativity. Susie leaves numerous family, friends, mega nieces, nephews and cousins who remember her kindnesses. She is the LAST of her LINE. A life well lived will follow her forever as her heavenly family welcomes her home. Her granddaughter Inger; grandsons Averill and Brian; great grandsons Ricky and Quantae; great great grandchildren Tayshawn, Aniyah, Aviyanna and Adrain will remember her in love. She will NEVER be forgotten!! JESUS THE SAME YESTERDAY, TODAY, AND FOREVER Hebrews 13:8

SUSIE FISHER JACKSON was born on October 4, 1924 to Robert and Virginia Fisher of Cumberland County, Virginia. She departed this realm on April 4, 2022 while in care at Harbor Hospital, in Baltimore, Maryland. She was immensely ill and unable... View Obituary & Service Information

The family of Susie Jackson created this Life Tributes page to make it easy to share your memories.