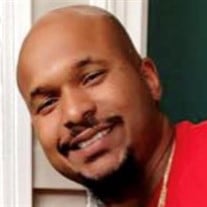 He who dwells in the shelter of the Most High will rest in the shadow of the Almighty. I will say of the LORD, “He is my refuge and my fortress, my God, in whom I trust.” –Psalm 91:1-2 Stuart Davis Jeffries, affectionately known as “Stu” was born July 15, 1988, in Richmond, Virginia to Yolanda Fox and the late Calvin Jeffries. He was followed by his sister Tai Breanna Jeffries, four years later. He was preceded in death by his earthly brother Corlin Johnson and aunt Rolanda Lofton. He attended Henrico County and Richmond Public Schools and graduated from John Marshall High School in 2006. He later furthered his education and obtained his C.D.L. license. He was a loyal employee of A.T.D. for over five years and most recently worked for Pepsi. He was a humble and quiet man who was fun to be around. He was always smiling and always told you he loved you. He was a die-hard RedSkins fan and always loved to match and dress well from head to toe. He was a loving and devoted father. His greatest accomplishment was being a great father to his look-a-like daughter Mariah Ann Jeffries. He loved to eat healthy and stay fit. His favorite rappers were Tupac and T.I. He was a praying man. He prayed morning and night. He accepted Christ at the tender age of eight and was baptized at Richmond Christian Center. He was a loving son, wonderful big brother, and a caring friend. Stuart was just an all-around nice guy. He was confident and always loved to say “I got this.” Stuart was loved dearly and will be missed greatly. He leaves to cherish his memories: his loving and adored daughter, Mariah A. Jeffries; loving mother, Yolanda D. Fox; sister, Tai B. Jeffries; two brothers, Brian Mayfield and Michael Gregory; half-sister, Brandi Bell; three half-brothers, Calvin Jeffries, Jr., Brian Tiller, and Kevin Brown; aunt, Marian D. Branch; two cousins, Andrea R. and Fred D. Lofton; niece, Chloe A. Lofton; God-grandmother, “Nana” Vernell Garris; God-mother, Jewel Johnson; God-fathers, James Staten and Michael Whitaker; two God-sisters, Ebony Johnson and Kyra Johnson; his New York Family: aunt, Mary L. Mayfield; uncle, Alfred Rivers; two sisters, Andrea Rivers and Kristina Mayfield; very devoted friend, Tiffany Mollineau and his “Homies for Life”, Chris Hite, Philip Riley, Freeman Chavis, Jamel Moore, Brandon Garlick, Trevon, Albert and Brian Mitchell, DJ Armstead, and George R.; and a host of other relatives and dear friends.

The family of Stuart Davis Jeffries created this Life Tributes page to make it easy to share your memories.

He who dwells in the shelter of the Most High
will rest in the...

Send flowers to the Jeffries family.