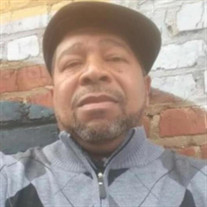 Steven Winfred Johnson, 52, born in Albemarle County, Virginia April 9, 1968 to Patricia Ann Johnson and the late Curtis Winfred Johnson, Sr. His eternal life began March 24, 2021. Steven Johnson attended Goochland High School where he obtained his GED. Steven accepted Christ as his savor at New Jerusalem Baptist Church. He was employed at Aerotek as a Foreman/Forklift Operator for two years. He also worked for Forest Lawn Cemetery as a Burial Ground Custodian. Steven enjoyed cleaning cars, yard work, being a motivational speaker, and listening to his favorite music. On August 9, 2014, he was joined together in marriage to Loretta. My husband was such a wonderful man. I’m not sure I am really express just how much I will miss him. Not only was Steven a wonderful husband but he was also a wonderful step-father to my children and grandchildren which were an extension to his heartbeat. He was my best friend and so much more. Steven’s ability to make everyone feel comfortable, secure, and loved were his greatest strengths. It has been nearly seven years since we were first married and I look back over those years with so much happiness. I remember the 1st time we met it wasn’t love at first sight but that didn’t last long. I remember him riding on his scooter to meet me at O’Charley’s Restaurant and my first thought was seriously. Today he’d tell me “You didn’t like me because I drive a scooter”. My reply would be, That’s not true babe, I accept everything about you. He leaves to cherish loving memories: wife, Loretta Johnson; step-children, Shanel, Michael, Eric and Wanya; step-grandchildren that always called him “Papa”; mother, Patricia Ann Johnson; brothers, Curtis Johnson, Jason Johnson, and Joseph West; uncles, Frank Johnson, Victor Carter, and Donald Carter; aunts, Mary Hughes, Barbara Hughes, Phillips Wilson, Rosa Lee Woody and Ann Carter; sisters-in-laws, Catrina McCracken, Diane Carroll, and Delphine Saunders; nephew, Curtis W. Johnson III; niece, Curtishia L. Johnson; devoted cousin/brother, William Carter (devoted) and James Carter; a host of other relatives and friends. Steve was loved by many and will be truly missed.

The family of Steven Winfred Johnson created this Life Tributes page to make it easy to share your memories.