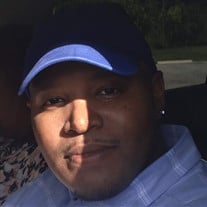 STEFAN HAMILTON CARTER SR., affectionately known as “Stef”, was born on February 11, 1983 in Philadelphia, Pennsylvania to Constance Carter-Randall and the late Stewart H. Carter Sr. On Sunday, April 10, 2022, Stefan was suddenly taken away from us. He passed away at the age of thirty-nine years old. Stefan attended Baltimore County Public Schools and graduated from Catonsville Senior High School in 2002. As a little boy and of course being the baby of the family, he was the apple of our eyes and spoiled in a good way. He was so loved by family and friends. The neighbors of the 8500 block of Fayette Street in Philadelphia adored him. Stefan was a loving and kind child. His smile was infectious. A loving heart and loving spirit. While living in New Jersey before the move to Baltimore, Maryland his grandmom Allen bought him a dog. He named him “Pepper”. They were inseparable, with his dog and his little red jeep he took Holly Drive by storm along with his new little friends and new neighbors that came to know and love him. Stefan met the love of his life while still in high school, Nikkisha Stephens. They were joined in Holy Matrimony on October 28, 2005. From this union two sons were born, Stefan H. Carter Jr. and Kenneth Carter. He was a proud father and a good husband. He loved his family. He was a family man. He loved us all, family first. Stefan loved family vacations. He would visit amusement parks, Ocean City, Maryland, Wildwood, New Jersey and Atlantic City, Maryland. Several years ago he and his family traveled to Tampa, Florida for his wife’s graduation from college. It was a very exciting time for them. Stefan was employed and worked at various jobs, the first at CVS Pharmacy in Catonsville, Maryland after school and weekends, The Linwood Children’s Home, The Bank of America and Chase Bank here in Baltimore. He than was relocated to Phoenix, Arizona. Stefan could no longer be in the workforce due to an on the job injury and had several major operations over the years. He and his family moved back to Baltimore to be with family for moral support and our love. Stefan instilled his Christian values in his sons as he was taught, a meaningful faith in God, being honest, kind, unselfish and respectful. His legacy to his sons are not his footprints on the sands of time that will be remembered but the imprints on the hearts of those he loved. Stefan leaves to cherish his memory: a loving and devoted wife, Nikkisha Carter; a loving mother, Connie Randall; two sons, Stefan H. Carter Jr. and Kenny Carter; sister, Tanisha Carter; brother, Stewart H. Carter Jr. (Rheleah); two nieces, Meerical Johnson and Hope Johnson; nephew, Sidney Johnson; half-brother, Eric Carter; step-father, Ronald E. Randall Sr.; step-mother, Gloria Carter; step-sister, Tomeka Randall; step-brother, Ronnie Randall; two aunts, Vernell Link of Baltimore, Maryland and Anna Robbins of Jacksonville, Florida; two uncles, Ivan Link (Chantel) of Cypress, Texas and Paul Carter (Pamela) of Baltimore, Maryland; great-uncle, John Catlett; great-aunt, Gloria Catlett; and a host of loving cousins and friends. To lose a child is losing all of your tomorrows.

The family of Stefan Hamilton Carter created this Life Tributes page to make it easy to share your memories.