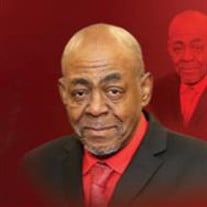 Deacon Stanley Carter St. was born to the late Mr. Rubin an Mrs Lula May Carter on July 25, 1941, in an in home birth at 11 N. Gilmor Street in Baltimore, Maryland. He was the second to the youngest of seven children. He was educated in the Baltimore City Public School system. He attended Henry Winter Elementary School, Booker T. Washington Middle and Frederick Douglas High School. Deacon Carter was a very hard working man, he was employed by Seton Hill Manor as the Superintendent of Housekeeping for twenty years and retired from Lorien Health Center as the Supervisor of Environmental Services. In 1977 he joined the St. Peter Claver Catholic Church where he attended for three years, until he met the love of his life Mrs. Rose Izzard in 1980 he converted to Christianity and joined Mason Memorial Church in Christ where they were married on June 21, 1986 and attended for twenty years. In December of 1999, they joined and became charter members of perfecting Prayer and Praise Ministries under the leadership of Pastor Randy L. Spann. Deacon Carter was a faithful, reliable, loyal and trustworthy member and served as the Chairman of the Deacon Board until the Lord called him home on May 17, 2021. Deacon Carter was a good, hard working, helpful Kind and loving man; who loved the Lord, his wife and family with all his heart.. He was proceeded in death by his parents, Rubin and Lula May Carter, his siblings Olivia Frederick, Leroy Carter, Leitha Washington, and Earnest Carter. His beloved mother in love Emma Izzard. His two son in laws Jerome Graham Jr. and Theodore Betts. He is survived by his only living sibling James (Kim) Carter Sr. He leaves to cherish his memory, his wife of thirty eight years, Mother Rose M. Carter. His children Wanda Betts, Brian Carter, Valencia Graham, Remel Watson, Shanna Carter, Stanley (Ra'Mona) Carter Jr. Nelson (Renee) Stroman, and Larry (Debbie) Fitch. His God Daughter Jewel (Jordan) Travlee and his sister in love Christen Matthews. He will be sorely missed by all of his Grandchildren, Great Grandchildren, a host of Nieces, Nephews, the children of Carter's Caring for Kids, Friends his Pastor Randy and Co Pastor Grace Spann and all of the members of 3PM Church.

Deacon Stanley Carter St. was born to the late Mr. Rubin an Mrs Lula May Carter on July 25, 1941, in an in home birth at 11 N. Gilmor Street in Baltimore, Maryland. He was the second to the youngest of seven children. He was educated in the... View Obituary & Service Information

The family of Stanley Carter Sr. created this Life Tributes page to make it easy to share your memories.

Deacon Stanley Carter St. was born to the late Mr. Rubin an Mrs...