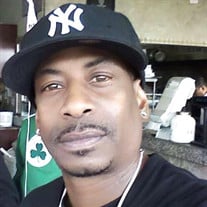 STANFORD ANTHONY BROWN, son of the late Stanford Lee Bouldin and Annie Beatrice Brown, was born February 2, 1967, in Staten Island, N.Y. On Thursday, April 14, 2022, he entered Eternal Rest at his home in Baltimore. Educated in the public schools of Staten Island, he attended P.S. 18 and P.S. 40, Junior High School 49 Berta A. Dreyfus, and Susan Wagner High School. Tony, as he was affectionately known, loved playing with his tool kits, which is where he began his love of building and construction. GI Joe action figures and toy soldiers were his other childhood loves. He cherished putting together jigsaw puzzles with his mother and playing Spades with friends. As a Cub Scout, he learned survival and outdoor skills and tried to keep himself physically and mentally strong. In Shiloh Baptist Church, Tony sang in the Children’s Choir and participated in Easter programs. A favorite Easter song was “He rose, He rose, He rose from the dead, And the Lord shall bear my spirit home.” On a visit to his Aunt Mary Rhodes in Baltimore, Tony shared that he sang in the children’s choir. Impressed, she taught him one of her favorite songs: “He may not come when you want Him, but He is always right on time.” These experiences connected Tony as a small boy to God and his family’s spiritual legacy. As a teen, he enjoyed basketball with neighborhood buddies. He had a talent for Art and Drawing and loved sketching landscapes, scenery, and action figures. Tony was also a budding graffiti artist and an aspiring Rap Artist. With the help of a music producer, he and friend Harry “Junior” Veden produced a video. Tony was a carpentry apprentice under Timothy Belmar. He also worked on home renovation and building restoration. He renovated an apartment so skillfully, the property owner rented him the apartment. After moving to Baltimore, he continued using the skills he had mastered. In Baltimore, he reconnected with family, especially his oldest brother Cornell where Tony lived until he established his own home and family. However, Tony never lost his connection with his Staten Island family and friends. On January 9, 2010, he married Eva Caldwell. They met as teens on Staten Island. He spoke with happiness about her, saying, “We built a beautiful life together.” Home and family meant everything to him, and he worked conscientiously to be a great husband, father, brother, uncle, grandfather, and friend. Tony was a child of God. He diligently read and studied the Word of God and wanted to be an example for his children. He accepted Jesus, continually reaffirmed his faith, shared his testimony, and trusted God throughout his fight with cancer. Though deeply saddened, through our tears we celebrate his life. His memory is cherished by: his wife, Eva; children, Juaniece, Tiarra, Allira, Brandyn, Jordyn; step-daughters, Kristen and Cameryn; step-granddaughter, Naaliyah; siblings Verna (Gregory) Robinson, Cornell Battle, Stanley Bouldin, Yvonne Battle, Micia Brown, Concetta (Kevin) Sims; father- and mother-in-law, George K. and Janet Lee; brother-in-law Morgan (Tisha) Lee; sister-in-law, Jessica Lee; special cousin, Barbara Draughn; special friend, Harry Veden; and a host of nieces, nephews, cousins and friends.

The family of Stanford Anthony Brown AKA Tony created this Life Tributes page to make it easy to share your memories.