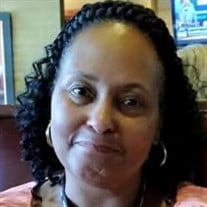 Shirmaine Monica Newby , daughter of the late Columbus Newby Sr. and Patricia Boyd Newby was born on June 10, 1955 in Baltimore, Maryland. On June 18, 2021 she was called to receive her heavenly wings. Shirmaine was a knowledge seeker and educated by Baltimore City Public schools where she graduated from Northwestern High school in 1974. Her motivation for higher learning resulted in achieving an Associate of Arts degree in Nutrition from Community College of Baltimore and numerous accounting certifications from the prestigious Notre Dame of Maryland University. Shirmaine began her career employed by the Baltimore Police Department as an Administrative Assistance and later advanced as a Data Entry Specialist at Westinghouse Defense Systems now known as Northrop Grumman where she retired as a Payroll Specialist after 40 years of service. On January 26, 1975 she was blessed to give birth to Monica Tassia Newby at Sinai Hospital in Baltimore Maryland. Her strong faith in the Lord inspired her to dedicate numerous hours of missionary service as a longtime member of the New Psalmist Baptist Church. Shirmaine had a multitude of interests to include enjoying novels of various genres, brain stimulating puzzles and word games, church fellowship, making sure her hairdo was always on point, and most of all spending time with her family. Shirmaine’s beautiful life will forever be cherished by: her daughter Monica Akonnor, son in law Michael Akonnor Sr., five grandchildren Michael Jr., Myles, Mekhi, Matthew, and Morgan Akonnor, her sister Jittaun Burgess, her nieces Monique Riviera, Larzine, Patricia, and Danielle Burgess, life long companion David Frazier, god son Damian Frazier, several great nieces, and a host of other relatives and friends. Loving, Giving and Fashionable

Shirmaine Monica Newby , daughter of the late Columbus Newby Sr. and Patricia Boyd Newby was born on June 10, 1955 in Baltimore, Maryland. On June 18, 2021 she was called to receive her heavenly wings. Shirmaine was a knowledge seeker and educated... View Obituary & Service Information

The family of Shirmaine M. Newby created this Life Tributes page to make it easy to share your memories.

Send flowers to the Newby family.